The Calm Before the SDBW Storm... 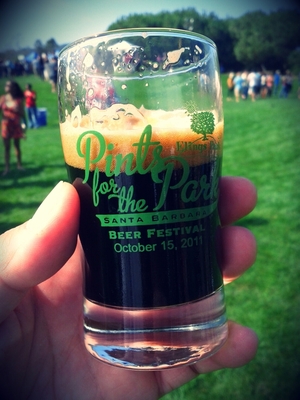 Ah yes, Pints for the Park. We certainly drank a few pints this past weekend. Actually, we drank many of them at the Pints for the Park Santa Barbara Beer Festival. This annual event takes place every October to help benefit beautiful Elings Park as well as the Santa Barbara Rugby Association. My girlfriend’s father happens to be the assistant VP of the Rugby Association and helps to put on this festival every year, so there is no reason for us not to go.

Representing the San Diego Craft Beer community, Karl Strauss and Stone Brewing were on site to pour some their popular ales. Karl Strauss served their Tower 10 IPA, Red Trolley and Whistler Imperial Pils while Stone poured their Smoked Porter, Cali-Belgique and Arrogant Bastard. While it was nice to taste the familiar SD beers, I was impressed to see a lot of Santa Barbara and central-California based breweries filling my glass.

The picture you see above was a pour from The Brewhouse, based in Santa Barbara. They had a Ghost Chili Porter that was quite possibly the spiciest beer I have ever tasted. Now, I know that our very own Ballast Point puts out it’s Habanero Sculpin as well as the recent Indra Kunindra Curry Stout, which both have their fair share of kick to them, but I can usually finish those with barely a drop of sweat on my brow. The Brewhouse’s Ghost Chili Porter kicked my ass. It kicked a lot of people’s asses. For those of you who may not know, the Ghost Chili, also known as the Bhut Jolokia, is considered one of the hottest chilis in the world and has the spice capacity to make a jalapeno taste like a frozen mint. The headbrewer at The Brewhouse explained that he used a combination of Habaneros and Ghost Chilis then let them soak in the fermenter to kick up the spice. Let’s just say that there was no shortage of this beer at the fest since it was the palate wrecker of all palate wreckers.

Probably my favorite beer of the fest came from Union Ale Brewing Company which is also based in Santa Barbara. They were pouring their PineHopple IPA, a medium-bodied, citrusy IPA that maintained a hoppy and pineapple-ish aroma and drank extremely well under the Santa Barbara sun. It also served to stabilize my taste buds after being trampled by the Ghost Chili Porter. Some of the other breweries at the fest included Firestone Walker, Telegraph Brewing, Sequoia Brewing and Figueroa Mountain Brewing, just to name a few. The fest also allowed the local homebrewers associations, such as C.A.R.P. Homebrewers and the Santa Barbeerians, to pour some of their batches to the attendees. I would definitely like to see this aspect at more festivals down here!
Overall, it was a great day for all 2,000 craft beer drinkers that were there and a fortuitous opportunity for the central and NorCal craft breweries to come together and show off some of their best brews. If you’re in Santa Barbara next October and feeling a little parched,make sure to stay up to date at http://www.sbbeerfestival.com/.

So, what’s next for us here in San Diego? Well, there’s a storm a-brewin’ and it’s coming fast. That’s right, come November 4th, we will officially be celebrating the 3rd annual San Diego Beer Week! I think the website for SDBW sums it up best:

Leave it to craft beer to change a 7-day week into a 10-day beer extravaganza! For the past two years, I have attended several events that occur during SDBW and it is definitely worth skipping out of work a little early to get your hands on some of the finest and rarest beers you’ll find anywhere!

Whether it’s O’Brien’s Night of A Million Zillion Speedways where they serve over nine variations of Alesmith’s Speedway Stout (including the Kopi Luwak “Civet Weasel Poop” Stout) or Hamilton’s Dogfish Head Bonanza where they’ll be tapping the hard-to-find 120 minute IPA, I’ll be hopping around town trying to get my hands on the best of the best and you should too!

If you’re looking to mix up you’re craft beer with some kick-ass local music, then you might want to check out the San Diego Brewer’s Guild Festival on Nov.5th. This is the official kick-off event to SDBW with performances by Dead Feather Moon, Family Wagon and The Bloody Hollies! Not to mention you get tasters of over 32 local breweries and the chance to meet some of the masterminds behind the brews! I’m getting thirsty just thinking about the SDBW madness!

San Diego Beer Week runs from Nov.4th-13th so if you want to get a head start on your planning, here's a link to the events page for the 2011 San Diego Beer Week: http://sdbw.org/events/
With that said, I know Halloween is right around the corner and it’s that time of the year where breweries release a lot of their Pumpkin inspired ales. Do you fancy these pumpkin ales? If so, leave a comment below and let us know what some of your favorites are!