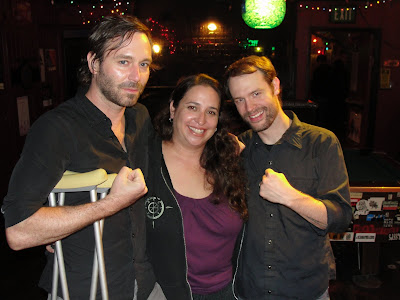 It was another brilliant Rocky Votolato show this past Tuesday at the Casbah and since I didn't really shoot at the last one, I wanted to make sure I got some oldies and some of the new stuff that Rocky hopes to put on a new record in early 2012 on video. This playlist consists of 8 videos, a little less than half his set from the night. To navigate the playlist, hit the next button in the YouTube navigation bar.
Playlist:

It was my first time seeing Matt Pond PA and I really enjoyed him, too, though I wasn't quite ready to shoot much. I did catch one song: Poor Matt broke his foot on tour, so it's a good thing all the musicians around him are so supportive or he might've just cancelled the tour altogether.
Posted by Rosemary Bystrak at Thursday, October 06, 2011