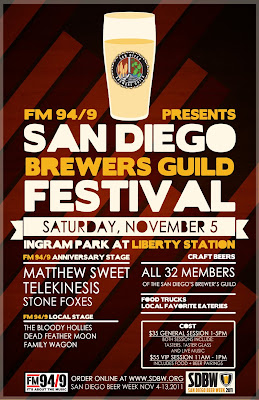 I'm a little behind on today's email, but just saw this fantastic one from FM 94/9. To celebrate their 9th Anniversary, they've teamed up with the San Diego Brewers Guild to celebrate San Diego Beer Week with a massive two-stage event at Liberty Station on November 5. This is the day after my 5 year  blog anniversary show at the Griffin, so sounds like it's gonna be a pretty awesome weekend in November. Plan accordingly!

We're looking forward to an amazing day filled with good food, great beer and killer music. The day will culminate with Mathew Sweet performing his landmark "Girlfriend" album in it's entirety to celebrate the 20th anniversary of its release.

Enjoy beers from every corner of San Diego as we showcase all 35 members of the San Diego Brewer's Guild pouring their hoppy, malty and frothy best.
In addition, several of San Diego's best food trucks and some of our favorite local eateries will be on hand.