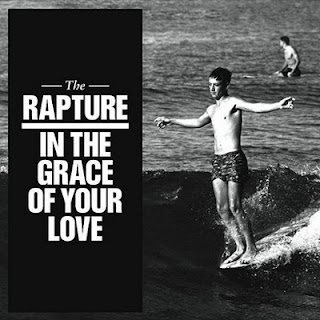 It's October, it's a Tuesday, and it's raining. I can't think of a better setting to go see The Rapture. The first time I saw them live was at Coachella, many, many moons ago. At the time they were one of the first bands to sign for James Murphy's new DFA Records. They had this dark, moody, mysterious sound that was drenched in dance/disco/punk sensibilities, and this was way before you even used those words together when referring to the sound of a band. I mean, let's be honest, The Rapture (with the help of one little iconic James Murphy) pretty much paved the way for the dance/punk/disco genre. Anyhow, I digress...so, I'm at Coachella, the sun has just set, I'm in a bit of an altered mind state, and all of a sudden I hear these sounds, these spooky guitar riffs and dark, heavy drums as I approach the Outdoor Stage. Nothing but darkness and white lights. I start running, fast, because I realize it's The Rapture, and I don't want to miss it (haha, take that as you will). I always describe the next 45 minutes as the first time I went to a really scary haunted house when I was a kid. It was dark, I was scared, but excited. I didn't know what to expect, I wanted to close my eyes, but I couldn't stop staring. The cowbell, the saxaphone, the haunting bass, the screeching guitar riffs...it was f#*king awesome. By the time it was done I couldn't even remember what happened, but I knew I wanted it to happen again. Sister Savior, House of Jealous Lovers, I Need Your Love...I'm getting chills just thinking about it. For the rest of the weekend I was constantly humming one of these songs to myself and The Rapture had solidified themselves as my favorite band...for that month or two. So, what have we learned from this nostalgic little ramble of mine? Go see The Rapture tonight. You won't be disappointed. If you're a long time Rapture fan, then you know exactly what I'm talking about, and if you have not seen them before, you are in store for one hell of a show. A lot has changed since their first record. They ended their partnership with DFA, they went to a major label, they put out another album with more pop sensibilities (co-produced by Danger Mouse, this album is also great), they broke up, they got back together, they started working with DFA again (sans old bassist Mattie Safer) and in many ways, they have come full circle. Back to where they started. Back to where they sound the best in my opinion. In The Grace of Your Love is the comeback album you could only dream of for a favorite band gone array. It's eclectic, familiar and new in all the best ways possible. Don't miss The Rapture tonight. You will be sorry you did.