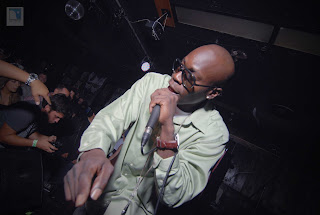 J.Rosey Jameson: who?
me: Parker Ebert. Me and my partner, JaySiskel wrote the piece on Devin the Dude last month.
J.Rosey Jameson: who?
me: Devin th...
J.Rosey: I know who Devin the Dude is, who the hell are you?? And what in the cheezandrice do you want?
me: Tickets. Im reviewing the Kool Keith show tomorrow night at the Ruby Room. Your receptionist Lily called. Told me come pick-up 3 tickets, for me, Siskel and our photographer Tony M.
J.Rosey: Tickets? 3?? Why? Whadyahave security? An entourage? Are you famous? Britney? Taking a date? There’s one of you. One ticket.
me: uhh..okay. Should I get it...from...at… the venue?
J.Rosey: How should I know? You're a writer. I don’t know how you do what you do. You're supposed to be slick, sly, resourceful, ear to the street, pulse of the city, stuff like that.. Figure it out. You think Bernstein’s boss let him into Nixons office?
me: uh, Bernstein didn’t go into Nix...
J.Rosey: That’s right! You think the Tribunes owner filmed ‘Deep Throats’ confession for the jury? You're a journalist. Get it done. Think on your feet like Axl Rose in 'BeverlyHillsCop' and get the h*ll out of my office. Have that review on my desk Monday morning. LILY!!! Fire whoever made this coffee and get me a new cup!
(Lily pops up, pushes me out as she goes in and slams the door). 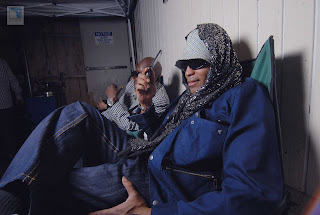 -------Saturday (show night) -------
Not going to waste anytime with formalities, this was impressive. One a.m., 60-65 people. Every person in the venues at the stage but there’s no pushing. No catty glares. No tall guys in front of the shorties. Everyone has enough elbow room to throw their hands in the air. Keith rockets through a riveting 38min set with only one stop between songs(a 7min rant on skinny jeans. Yep…skinny jeans). Instead of seven 3min songs he gives us 90secs of 22 classics. And I do mean CLASSICS. The crowd goes crazy. They know every word. 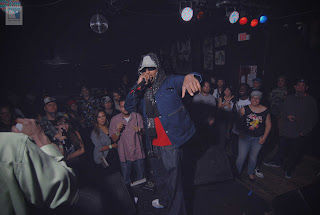 And I do mean EVERY. After 2 encores he steps off the stage. No one moves an inch. No one rushes him. No one accosts him. The mob freezes in place and applauds with fevered energy as Black Elvis coolly makes his way from fan to fan. Taking pictures, shaking hands and signing posters with each person. This is what’s most amazing about the night, the mutual respect exchanged between Keith and his fans. We don’t rush him and he doesn’t rush through his time with us. It’s easily one of the most genuine examples of art appreciation I’ve ever seen.


*Name: Denis Deft.
Occupation: emcee/stage associate/ladies man.
Where’d you get your start? : “Ice-T and Hen-Gee are my cousins. I made my first million when I was like 15. I got a verse on Ice’s 6th album “Return of the Real” on a track called ‘Crampin Your Style’. It was fly being that young and being able to take girls out, stopby any record store, show ‘em your record. 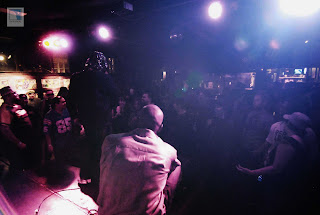 How’d you and Kool link? : Ice useta always say Keith had the illest, craziest rhymes and was such a good guy. It just kinda happened. We been touring together for like the last ten years.”

Whereto next? : “Home…but we play with Odd Future in a couple days”

Interesting. Whadyathink of them? : “They’re cool. They’re working on a show for Adult Swim and we’re just finishing ours up so I think they’re both going to come out ‘round the same time.”
Closing statements? : “Denis Deft. International Flyguy. Coming to a pretty girl near you.” 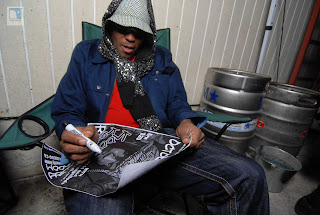 My sibling K.E.(bigshout Coastalninja.com) from the Bronx told me as a break-dancer you once performed for former president Ronald Reagan. What was that like? : “He was a good guy (sly smile).”

The crowd went crazy when you dropped into ‘Poppa Large’ (off the UltraMagnetic MC’s “Funk Your Head up “album). Does it always get that reaction? : “We’re actually working on a new UltraMag album. We think people might be ready for it.”

You took 5-6 min outa tonight’s show to speak on the fashion trend of skinny jeans. Care to elaborate? : “ I’m starting a coalition against skinnypants."
Why? : “It makes kids feel like they don’t have another choice…like they can’t wear baggy jeans…and it automatically gets them useta wearing women’s clothes. Especially 18-20 yr olds.”

Keith is a man with a P.O.V., original and unique and in this time of cookie cutter microwave music I can't think of anything we need more desperately. -GMG
Posted by Parker and the Numberman (aka P&T) at Monday, October 24, 2011