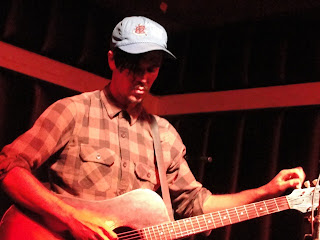 I have to say that as far as my music tastes go, I've been so lucky to see so many of my favorite boys with guitars these past couple months. It kicked off with Ray LaMontagne in September, then went on to include shows by Bon Iver & Other Lives, Bright Eyes, AA Bondy, Blind Pilot, Rocky Votolato, Chamberlin, Ryan Adams, The Lemonheads and last night, Joshua James. (And Dylan Leblanc on Friday!) I mean, I wasn't orgasmic like the annoying blondes who announced at least 12 times that they "drove four hours for this show", continually shushed the crowd throughout the set, and were orgasmically repeating "Oh My God" every time Joshua upped his intensity, but I was in a happy place at the show, even when the entire stage and lighting burst into darkness by a blown fuse (or something more cosmic?). It had been far too long since Joshua played San Diego and though they bolted back to Utah as soon as their set was done, it was nice being able to chat for a few before they took off. The openers, Desert Noises, were awesome, too, and I shot some video of them. Both of the embeds are video playlists, so you can see multiple videos by clicking the advance button or by watching them through YouTube. HoneyHoney was great, too, but I blew all my battery power so didn't get to shoot them at all. I need to remember more batteries when I decide to travel without a purse!

This was a great show, Rosey. Great photo too. You do a great job with the blog, and I'm going to put this as a favorite so that I check it often!

Thanks, Jacko. I'm glad you caught the show and thanks for bookmarking my site!