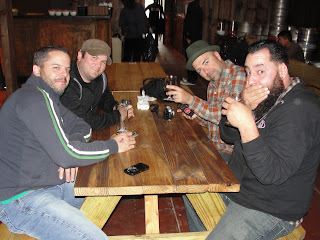 Beer week kicked off with a rainy Friday in San Diego. My good friend and beer blogger Jonathan and I had made plans to hang out on Friday and somehow a noon lunch ended up starting closer to 3 after he kindly ran some errands with me (a ride to my credit union is hard to come by sometimes). We decided to try Tiger Tiger, the newish spot on El Cajon near 30th brought to you by the people behind Blind Lady. We had planned on eating a pizza at Blind Lady later, so we opted to share the fried oyster po boy. It was delicious but the half sandwich ended up being the only thing I ate all day. Such a rookie mistake. I'll get back to that later. 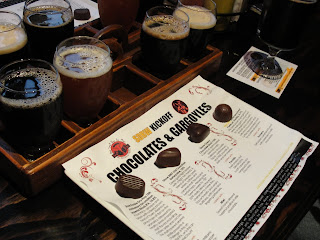 While we were at Tiger Tiger, Rich Cook walked in with Jack Elger from Lagunitas and their friend Michael who as a beer distributor, is on a one man mission to bring craft beer to San Jose. The four boys geeked out on beer talk as I was immersed in a new language. After a beer and lunch, we decided to split but made plans to reconvene at Small Bar. 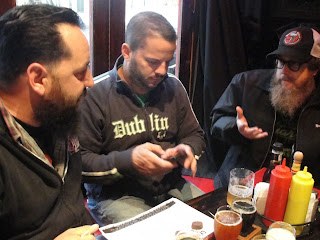 Jonathan and I swung by Blind Lady but it was pouring rain and we didn't see an immediate parking spot, so we decided to skip on to Small Bar. The guys had the prime corner table and after they ordered two flights of the Chocolates & Gargoyles and after I had a couple beers, I was in a good happy place. Scot Blair (the guy behind Hamilton's, Eleven, Small Bar and Monkey Paw) joined us, and then Greg Koch from Stone showed up and said hi and suddenly it took the Beer Week Dream Team to a whole new level. 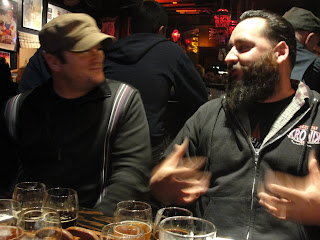 I had a couple glasses of Rogue Mogul Madness, eventually everyone was on their merry way, Jonathan and I finished the beer flights and he took me to The Griffin for my anniversary party. Joe from The Griffin set up a promo with Batch 19 which is a "pre-prohibition recipe" by Miller/Coors. It's pretty damn tasty so don't knock it till you try it.  Anyway, that kept me in a happy place all night. Well, that and the whiskey gingers. Yikes. It was a good night but, um, ouch. I REALLY need to remember to eat full meals before nights like that.

Beer week continued for me on Saturday at the San Diego Brewers Guild festival/FM94/9 Anniversary Party at Liberty station with Pyles. The day was so beautiful after the rain, but if I've learned anything, it's that when I'm at an outdoor beer tasting, one hand is for the beer, one is for food sampling, so I didn't shoot a single photo all day. Though it was an awesome event, the lines were crazy long and the distance from the stage to the beer tents clearly didn't warrant people leaving the beer area. As with most beer festivals, Most people just get in the next line after they get a pour because the 4 oz doesn't last very long. You also spend less time savoring the beers and most people don't give a shit about what's being poured. I tried to take notice, but after awhile you just kinda drink. I was stoked to FINALLY try some beers from Hess and they went well with my Gaglione Brothers cheesesteak while I watched Matthew Sweet before calling it a day.  That night was Jesse LaMonaca and the Dime Novels fundraising BBQ show/dinner, so I was off the beer week clock on Saturday night.

After laying low most of Sunday, Colin Clyne and I decided to head to North Park. We went to Duvel night at URBN, though I stuck to the draughts. We shared some wings and headed to Bar Pink for the Smokey Brights and Jesse LaMonaca and the Dime Novels and I enjoyed Manzanita IPA until I switched over to $2 Tecates and tequila. Because that's what I do.

As I've mentioned, Monday sucked, so I'll strike it from the record. Tuesday night, Jeff and I went to the Sezio & FM 94/9 Random Act of Kindness at El Take It Easy. They had Moonlight on their taps, so I had the Homegrown fresh hop beer, we had some shrimp ceviche, we canoodled with Sezio, people won prizes for an hour and we were on our way. We decided to have dinner at South Park Abbey for the first time ever. Their burgers kicked ass though the general vibe of the spot left a little to be desired. They claim the "best wings ever", but I think the ones at URBN and West Coast Tavern are better. Still, their happy hour was cheap (until 7pm daily) and their local beer was a 9% Shipyard IPA for $1.50. You really can't beat that anywhere. From there, Jeff had to split for a while, so I hit URBN for New English night, West Coast Tavern to see friends and chat about our show at The Irenic, and then was off to the Soda Bar where I enjoyed some Damnation.

Considering Wednesday was a Casbah night and I stuck to Amstel Light and I didn't get out last night, I guess that really concludes my San Diego Beer Week adventures so far. I'm sure Chuck and Jonathan have way more to talk about but in the meantime, today I'm hoping to pick up some of the 11.11.11. Stone Vertical Epic bottles, maybe hop around North Park, and maybe make another self guided pub crawl for myself. Hope to see some of you along the way.
Posted by Rosemary Bystrak at Friday, November 11, 2011