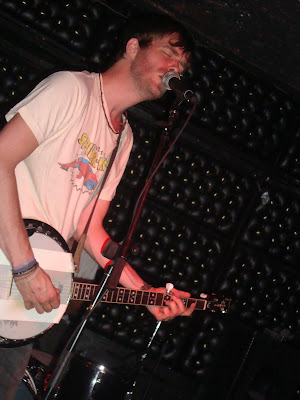 I spent Saturday afternoon at StayClassy.org's Tailgate Party at Petco Park, left before the Padres game even started, and took an unintentional nap before realizing I hadn't really planned out how I was going to get to the Casbah. Fortunately Jake didn't have plans and we headed down to the show. I have to say I was a little disappointed that I didn't make the time to preview this show because it is one that I certainly thought would/should sell out. It was a good crowd for sure but WE CAN DO BETTER, SAN DIEGO!

Anyway, I hoped we'd get there for Modlins, but only caught their last few songs. They had a lot of friends out to catch them early and that was certainly nice to see.

I was so excited to see Illinois again. Their last show in San Diego was a while back at Cane's when they played with Blitzen Trapper and The Hold Steady. Andrea and I had caught their show a couple months before that at Casbah and were blown away, and frontman Chris 'Arch' gave us his number to be on the list for that show and I've had a certain soft spot for them ever since. 'keep on reading' for more.


So Illinois did a pretty unique thing over the past year, releasing their music in small 3 or 4 song eps, each accompanied by video episodes following The Adventures of Kid Catastrophe, playing a release show for each chapter, allowing people to buy a flash drive that could be updated as each new chapter was released. Unfortunately the Pennsylvania based band played mostly east coast shows and a couple coastal residencies, so I just had to be a patient fan, waiting for them to return to San Diego. Now that the full album, The Adventures of Kid Catastrophe, is released (20 songs + videos! For $10 at the shows!) Chris and the boys were back. I don't wanna say the show was worth the wait, because I truly hated the wait, but it was everything I'd hoped it would be and more. After the set, as more and more people approached Chris to tell him how amazing the performance was, I know it wasn't just me glowing from the performance. Chris still rocks the banjo like I've rarely seen before.

Not to be too cheesy, but there are a lot of bands that I've met over time, and there are certain indie-rockers that always make me happy...Paul from Langhorne Slim, Marty from Blitzen Trapper, and Chris is definitely up on that last. We hung out for a while until it was time to catch The Builders and The Butchers.

The band started by saying that this was their fifth time at the Casbah in 15 months, and that they've never had a streak like that with any other venue. I think I've been to all of those performances, too, incidentally, and every show is an awesome party. The band was just named Paste Magazine's Band of the Week and just last week released a music video from their new record and also did a killer Daytrotter Session.

Their list of toys appears to keep growing, and the stage was strewn with tambourines, shakers, cowbells, pots and pans, and other noisemakers to allow the crowd to participate throughout their set. And did they ever. At one point I was back by the soundboard just watching the frenzied dancers with a smile on my face. But mostly I was upfront being a part of all of the fun.

They have a 12" vinyl that I really wanted that is a split with Loch Lomond, but watching the budget, and the lack of a download prevented my purchase, but as someone in the band told me, "just go get it from the internet."

They played a long crazy set and it was a nice follow up to having seen Blitzen Trapper and Loch Lomond just a few days before.

After the show ended I chilled around the back bar talking to Martin from Illinois and then playing pool with Chris. He told me I wasn't allowed to blog about my win, but since he took the second game, I guess it's ok. I didn't want the night to end and was sad when it finally did, but hopefully the guys won't wait another 2 years to come back around. In the meantime, can't complain about a 20 song record. check out more info on Illinois here.

Email ThisBlogThis!Share to TwitterShare to FacebookShare to Pinterest
Labels: builders and the butchers, casbah, illinois, loch lomond, the modlins