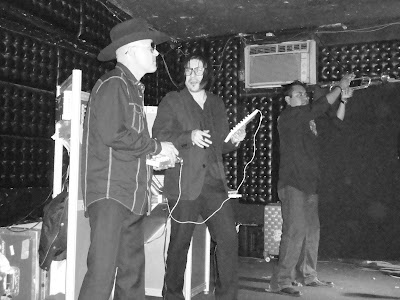 Last night I was supposed to spend the evening at the NBC studios filming a couple songs with Nortec Collective's Bostich + Fussible. We were notified early yesterday morning that because of an injury sustained at the Tijuana Airport, the session would have to be cancelled. As a curious creature, I wanted to see what happened, so with some basic digging, the details came to light. I wrote about the whole incident SoundDiego, but it appears there are updates, so I just wanted to add those here...

Where we left off was that Pepe Mogt, aka "Fussible" (pictured here, center) arrived at the Tijuana airport after a flight from Mexico city and claims he was hit from behind by Roberto Mendoza, a founder of Nortec Collective who performs under the name "Panoptico" with the Nortec Panoptico Orquestra. Panoptico took to Facebook to say that in fact, he was the one attacked by Fussible's staff, which resulted in a broken arm and fingers. (He posted his xray and medical receipts)

I didn't know where the strain in the relationship between Fussible and Panoptico came from, so I looked into it. According to La Ch, their differences stem from a legal dispute. A year and a half ago, Panoptico registered the Nortec name without the consent of the rest of the original collective. Fussible, Bostich, Hiperboreal & Clorofila legally took back the trademark Nortec Collective, as granted by the governing agency IMPI.

Yesterday afternoon, Fussible was said to be hospitalized and under supervision because of concerns about brain hemmorhaging. Around midnight, he once again took to Twitter and said that he will, in fact, be able to travel to Colombia and Medellin as he was diagnosed with a treatable ear injury (and posted his x-ray).

What's more interesting is the bickering happening on Twitter. Lov/Recs is Nortec Panoptico Orquestra's label and is replying to people that Panoptico is the one who is hurt. In response, Gerardo Padilla (@Pipillo2, who apparently has some connection to B+F) responded (in my best Spanish translation), "Panoptico publicly said on Facebook that our staff hit him. How is that possible if part of our staff is in Colombia and the rest traveled the day before, leaving just Ramon (Bostich), Juan Reyna, and Pepe Mogt. Panoptica wants to find a way to justify hitting Pepe in the head from behind..."

Read about it (in Spanish) here. As I mentioned in the SoundDiego article, the San Diego show on December 2 at the Casbah remains unaffected. Tickets are available here.
Posted by Rosemary Bystrak at Wednesday, November 24, 2010

crazy happenings. with all the shit going on in Mexico recently, I hope Bostich & Fussible take care of themselves. Looking forward to the show next Thursday......this show should not be missed! Let me know if thet NBC filming takes place or if anyone can go!!!!