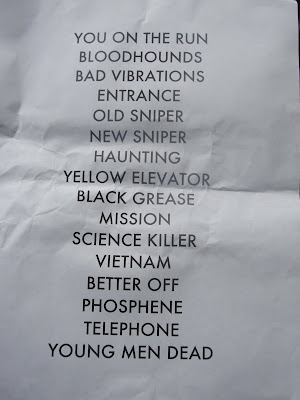 Last night I made my way up to the Belly Up for The Black Angels and Black Mountain show. I think one of the reasons I haven't posted my day after recaps is because I know that I'm not a photographer and I never want to present myself as such, but last night, Nate was supposed to take photos and the bands didn't let him in with his pro camera, so I had fun taking pictures and am actually gonna post them.

The show was awesome, though I really went with no expectations. When I'm at home listening to music, psych-rock isn't first on my list, but for a live show, it was fantastic. The show kicked off with The Black Angels and it was a bit of a rough start. The singer of the band was severely shocked by the microphone, and after trying to discreetly resolve the issue, he was obviously frustrated and yelled that the band would stop playing if he was shocked again. They put a mic windscreen on it and it seemed to be okay and the show continued with the band playing a full set. If I was better versed, I'd tell you they played all the favorites, but the reality is I just rocked out and took the crowd enthusiasm as a sign that the band was living up to expectations. I was just stoked to watch the guitarist, especially when he busted out his 12 string Rickenbacker.

Before Black Mountain came onstage, they announced that there aas to be no flash photography and pictures were only allowed for the first three songs...standard in most venues that require a photo credential, but not usually Belly Up's policy, so I took my three songs worth of photos (dim lights, fog machine and all) and I decided to just wander and listen to the show away from the front. While I realize the bands were playing against each other, my interest was better held by the openers.

For more photos and videos, click 'keep on reading'

what a fine show you are sending!

Seeing this lineup on Sunday up here in PDX. The Black Angels are always a mesmerizing live act. Thanks for providing a glimpse and posting the song list. Looking forward to it!

That was a great show. The Angels definitely stole the night, when I saw Black Mountain at the Casbah a couple years ago they put on a much better show