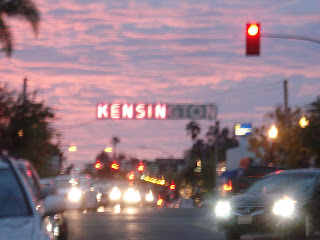 I've been a resident of Kensington for over a decade now, and I never thought when I took this sloppy photo that the Kensington sign would ever be absent from my view, but it's been a crazy fight and with community fundraising and planning committees bickering, the sign was taken down for safety concerns. An agreement on the sign's replacement was a long time coming, but with the community celebrating the centennial, the sign is finally back. Surely it won't be without controversy, because nothing in this neighborhood is ever easy, but the new sign is finally coming up.

The guys were hard at work throughout the night and you can see how they've been fighting through the rain to get it up before the centennial party this Saturday in the park at the Kensington library.

I personally am happy to see the sign return, no matter how different it might be than the sign that existed for over half a century.

You're Invited! Join your friends and neighbors at the Kensington Centennial Grand Finale Event on Saturday, November 27th from 1 - 4 PM - a community picnic at Kensington Library Park.

Your final look for the morning, though I was really hoping they'd test the lights:

Email ThisBlogThis!Share to TwitterShare to FacebookShare to Pinterest
Labels: kensington