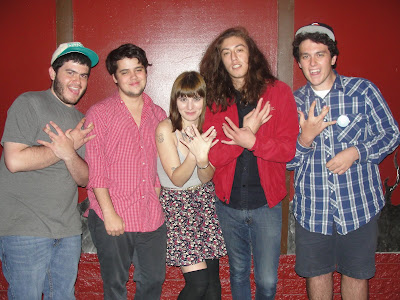 (ed. note: When the Best Coast show sold out earlier this week, I got a grip of emails and texts asking if I had any hookups for the show. If I could hook everyone up, I would, but capacity is capacity. I did however convince Kyle that I could get him in, in exchange for writing about his experience at the show. I think he did a pretty good job, and since I was outside with d/wolves from the end of their set to the beginning of Best Coast, I appreciate that he filled in the blanks. I shot a lot of video but my wi-fi has been failing, so I'll upload as soon as I can get my connection to last longer than 6 minutes. Thanks again to Kyle Lynch for the review.) 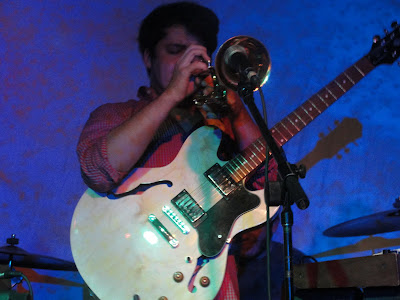 Last night was spent with some of my newest and most loved friends. After DJing at Bluefoot for an hour or so, myself and my lady headed down to The Casbah for the Best Coast, Sonny & The Sunsets, Dirty Beaches and D-Wolves show. After pounding a tall can in the car it was time to head inside, we caught the very end of D-Wolves who are now starting to really catch a buzz in San Diego and I expect them to start catching on in Orange County and LA as well.


Mid show smoke break, some hellos and hugs exchanged with all the fantastic people in attendance and it's time for Sonny & The Sunsets. Complete with a white background they took to the stage and immediately had the crowds attention as the colors changed from pink to green and back. Sonny's name couldn't be more spot on, they radiate beach pop that brings to mind buzzy days at the beach with friends and summer bbq's. Their San Francisco influences are all there, the jangle pop that has over taken them and now has that town a flutter is there, the hints of John Dwyer is there and my love for this band is too! Seriously if you get a chance to, go see this band! They deserve every good review, new fan and all the praise they've gotten.
On to the Atari Lounge for Montreal based Dirty Beaches...kind of ironic huh? This was my second time seeing him and he did not disappoint. A one man band armed with just a guitar, backing tracks, killer dance moves and the swagger of Elvis Presley himself! One solid set that included the crowds favorite hit "True Blue" definitely had me dancing and ready for Best Coast. 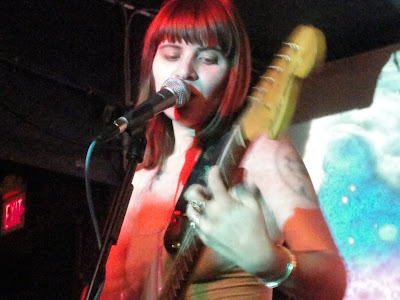 More drinks, more smokes, more hugs, more laughs and it's time for the headliner. This year has been huge for Bethany so I won't even bother with that. The white background has now been transformed into a 60's liquid projection show that provided just that perfect compliment to her garage pop songs. I was really excited that she brought out "Sun Was High" and "Far Away" two personal favorites of mine but clearly the crowd was awaiting they're faves from the new album. With almost every single girl in attendance singing along to "Boyfriend" and "When I'm With You" this show was now a full blown lovers party. Best Coast delivered on every plain even amidst hecklers and chants of "Garfield" in reference to her cat Snacks who was not in attendance but the boyfriend was, I give the night an A!
Posted by Rosemary Bystrak at Thursday, November 11, 2010