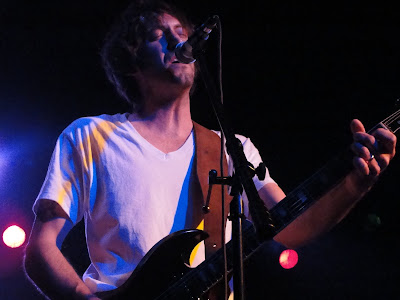 I generally don't post about the About The Music shows as they're announced because FM 94/9 does a pretty good job of spreading the word on their own and with super inexpensive ticket prices, they generally sell out quite quickly, but I LOVE the band they're kicking off their 2011 series with and if you haven't heard them yet, you're gonna be bummed if you suddenly discover them after the tickets sell out.

Everest has rolled through San Diego a few times this year, in support of Minus The Bear at Soma, with The Whigs at the Belly Up, and with Silversun Pickups, also at Soma. The band is made up incredible veteran musicians who among them have worked with or been members of Sebadoh, The Folk Implosion, Earlimart, Great Northern, John Vanderslice, and The Watson Twins among others.

They've got two records available. Their first, Ghost Notes, got critical praise, but it was recorded within weeks of the band's formation. It's On Approach that truly feels like a band making a unique mark in rock music, written as a unit after touring under their belts, with some inspiration from here and there, but still difficult to pigeonhole other than really freaking good music. The first time I saw the band, I though vocalist Russell Pollard sounded like an American James Walsh of Starsailor, but I think that band is more polarizing and Pollard has a smoother easier-on-the-ears voice than that, though I still kinda hear vocal similarities at moments, which to me is a good thing.

Email ThisBlogThis!Share to TwitterShare to FacebookShare to Pinterest
Labels: about the music, belly up, everest, FM 94/9