(ed. note: You all know and love Tim Pyles, and while he has his own site getting sorted out, he volunteered to write about the Gorillaz show for sddialedin.com We actually have a bet. I was sure that Gorillaz played 4th & B in 2002 but Pyles seems to think I'm making it up. ) 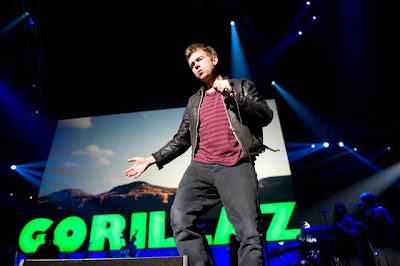 Gorillaz visited San Diego for the first time recently and as a frequent concertgoer this show blew any and all away! Not only is the band fronted by Damon Albarn (Blur), the touring band now features two members of The Clash; Mick Jones and Paul Simonon. Plus, you add in guest appearances from De La Soul, Little Dragon, Hypnotic Brass Ensemble, Rosie Wilson, Bobby Womack, Bootie Brown, Bashy and Kano, well magic ensues. Los Angeles had the privilege of seeing Lou Reed join with them the night before, but that's not San Diego. You could even say Snoop Dogg and Shaun Ryder of the Happy Mondays were on stage, but it was the huge screen behind the actual band.
I was so very excited about this show, having seen the band in LA back in 2002 on the first tour. During that first tour the band performed behind two screens that had projected visuals and animations, you only saw shadows of the actual players. The band has done limited touring since 2002, a few dates in 2006 (NYC & Manchester, UK) and now this HUGE World Tour in 2010. The band played the latest Coachella, as well. If you saw this show, feel lucky cause it was rare.
The show kicked off with Snoop Dogg on the big screen and just took off from that point on. Each song featured a different guest for the most part, with Damon Albarn as the ring leader. Both Mick Jones and Paul Simonon exuded The Clash cool on stage! It felt more like a show, a production than say a concert where the band plugs in and plays. This was awesome, but never seemed technical or lacking soul.
N.E.R.D. opened to a small house with people arriving slowly, but never let on with Pharrel giving it his all. I'm a fan of both artists and felt it was a dream match-up for a show. The both fall into this neo-Hip Hop thing, but rock too. I always see and hear lot's of colors...
Here's the setlist for Gorillaz:
Orchestral Intro
Welcome to the World of the Plastic Beach
Last Living Souls (with Hypnotic Brass Ensemble)
19/2000 (with Rosie Wilson)
Stylo (with Bobby Womack)
On Melancholy Hill
Rhinestone Eyes
Superfast Jellyfish (with De La Soul)
Tomorrow Comes Today
Empire Ants (with Little Dragon)
Broken (with Hypnotic Brass Ensemble)
Dirty Harry (with Bootie Brown)
El Mañana
White Flag (with Bashy & Kano)
To Binge (with Little Dragon)
DARE (with Rosie Wilson)
Glitter Freeze
Plastic Beach
Encore:
Cloud of Unknowing (with Bobby Womack)
Feel Good Inc. (with De La Soul)
Clint Eastwood (with Bashy & Kano)
Don't Get Lost In Heaven
Demon Days
Tim Pyles
http://www.thelocalpyle.com/
@thelocalpyle
Photo courtesy Andrew Youssef - Amateur Chemist -
Click here for more of his photos at Stereogum
Posted by thelocalpyle at Monday, November 08, 2010