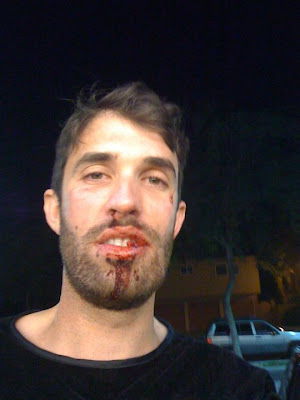 On Monday, November 1 at 2 a.m., two friends dear to the San Diego music community were jumped in South Park. Daniel C. (Blackout Party, Manchest & Her) and Martin N. (Republic of Letters) were jumped last night outside the 7-Eleven in South Park.

Great way to end Halloween, jumped by a soldier recently home from Iraq and his friends all because he doesn't like "fags" or people dressed like Freddie Mercury. "So you are a fag."
Hate Crime
2am, Nov 1, 2010
7-11, South Park, San Diego CA, USA
WTF

Martin was treated in the ER and police reports were filed, but the attackers got away. Martin says, "There was a girl there that knew them said he was just back from Iraq and had a pacemaker put in three days ago." The attackers were random and did not know the victims. "They are on the 7-11 video tapes although there are no cameras in the parking lot where it happened." Daniel was thrown against the car with enough force to dent the door. Additionally he says that the three guys and a girl took off in a car while Martin's girlfriend was on a call with 911, but they did get plates.

There was a similar incident the night before. If you have any information at all on the attacks, please call the SDPD at 619.692.4800.
Posted by Rosemary Bystrak at Monday, November 01, 2010

absolutely awful. soldiers aren't above the law, hope this dude gets the help he needs, and the justice he deserves.

and hope your friends are ok. :(

too bad a lot of the cops are ex-military and don't like "fags" either...good luck catching those assholes

This cannot be allowed to happen anymore. Ignorance is out. Tolerance is in. Though, fuck tolerance too, ACCEPTANCE is what is needed. This is not okay. Let everyone you know that you think this is NOT OKAY.

fuck catching them legally, let's go hunt them assholes. IF that dude really has a pacemaker just be sure to bring a microwave!