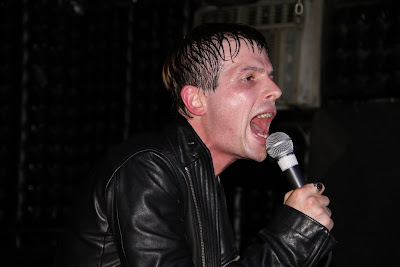 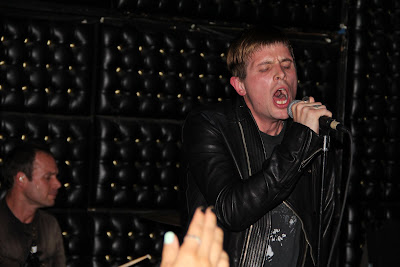 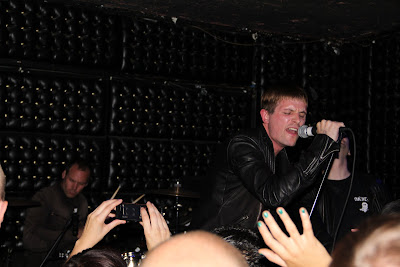 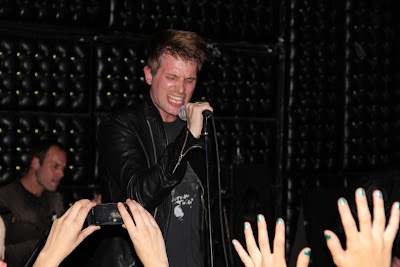 If you felt an overwhelming sigh come over San Diego Tuesday evening, have no fret it was just about every hipster/goth/alt girl in town fawning over Wesley Eisold of Cold Cave. Having missed the group the last few times they've been through town, I was especially excited for the nights show. The last time I had seen Wes and Dominic Fernow (the only other constant member) was 2009 when they debuted at Soda Bar and Casbah back to back nights. The group has morphed into a completely different beast all together, with a live drummer to round out the three piece. They've gone through female members from Caralee McElroy (Xiu Xiu) and Jennifer Clavin (Mika Miko) to just a backing track for the female parts but, I particularly love the addition of the live drummer.

Champagne being consumed for a pre game, our ride had finally arrived. Myself being the sole male in a car full of girls, you can imagine my eagerness to get there and start the night. We had missed the opening act Prurient, Dom from Cold Cave's noise project. I had really wanted to see them, alas to no such avail. Jeff Graves and Mario Orduno were on the decks spinning some dance tracks while the crowd anxiously awaited Austra. We located our friends who had posted up in a booth in the Atari Lounge while Porter poured up the cold suds and cocktails, a loud rumbling came from the main room. Myself and Donna Chang decided to dart in and get a good viewing spot for Austra. Austra is a fairly new band whose debut album was just released in May, comprised of four females and two males. Their brand of new wave has had hipsters pining for them, myself not so much. There is just too much going on in the band, they remind me of Dirty Projectors in the fact at how many musicians they have and the back up singers. In my mind there is absolutely no need for two back up singers in a "new wave band", in fact my girlfriend had referred to them as Evanescence-esque. LMFAO! They set was fun, the girls danced and their boyfriends stood perplexed. Yes, there was an odd number of "dude bros" in attendance unfortunately; Cold Cave has gotten to that level of stardom. I don't hate on it, I'm proud of what Wes has accomplished with his music considering his past projects never made it past the cult following because how unfriendly it was to peoples ears.

Caught up with Wes, congratulated him on Cold Cave's first headlining tour and the brilliance of the new album. We hung outside on the patio as CC set up, you could feel the anticipation in the room. We waited patiently as they set up and finally took the stage, clamoring for a spot in the middle with some room to dance my friends screamed as they hit the stage. Bursting into Villains of The Moon, my heart fluttered with happiness as we danced and sung to our hearts content. Wes flailing about the stage, giving sneers and the occasional smile. They played all the jams Confetti, Underworld USA, Catacombs, The Laurels of Erotomania, Love Comes Close, Youth and Lust, I.C.D.K., and The Great Pan Is Dead. I seemed to be the only one in my location freaking the fuck out over their set. Dancing and singing along like a crazed fan, I didn't care; this band has meant so much to me for so long and if you know me you know what I'm talking about. Dom occasionally ran across the stage towards the side door commanding people to dance or sing along like a new wave/goth version of Flava Flav. They then went into Burning Sage, one of my personal favorites; Wesley singing almost like he used to with his hardcore call and response. I screamed "Black Lungs" "Black Sun" "Black Tongue" garnering a wink and smile from him, my personal highlight of the night. They finished with two encores one of them being a fan favorite "Life Magazine", as the night came to a close I was completely drenched in sweat. I had left it all on the dance floor and didn't care who scoffed at me or who was annoyed, don't go to a show and expect to stand there with your arms crossed and not get bumped. As I made my way outside to grab a smoke, I stopped to talk to Wes about the set and catch up. He greeted me with a hug and we conversed over Cardboard City, his appreciation of F. Sean Martin (Hatebreed) and Daryl Palumbo (Glassjaw) who had contributed immensely to the making of Cherish The Light Years and his tour with Cult of Youth. All in all, fantastic night! Thanks to Rosemary Bystrak, Casbah, Cold Cave, Wesley Eisold and all of my friends in attendance for making this a truly special night!
Posted by ART VANDELAY at Thursday, July 28, 2011