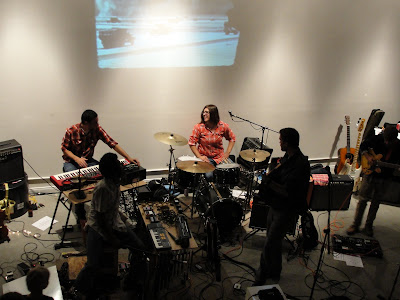 The Heavy Guilt celebrated the release of their 2nd record, In The Blood, on Saturday night at Glashaus, a coop artist workspace in Barrio Logan just a block away from Chicano Park. The night was fantastic, with music by Black Sands, Low Volts, Gun Runner, and of course, The Heavy Guilt. The Latent Print curated an art show along with the event that drew out more than 400 people. The Heavy Guilt kicked off the night with "Clove" from their first record and followed by playing "In The Blood" in it's entirety. Below is the playlist from the night (though I skipped the final songs after the record was done...battery issues).

The Heavy Guilt will have an LA release party for the record on Tuesday, July 19 at Hotel Cafe at 11pm. Tell your LA friends to come on out!
Posted by Rosemary Bystrak at Monday, July 18, 2011

Email ThisBlogThis!Share to TwitterShare to FacebookShare to Pinterest
Labels: glashaus, the heavy guilt