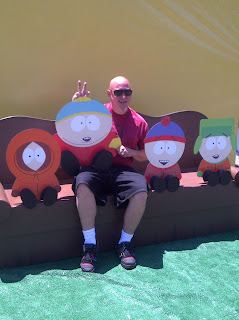 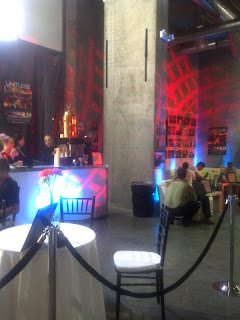 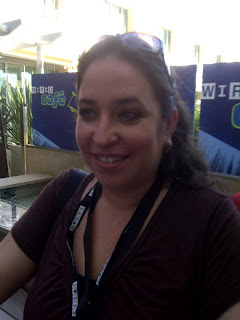 I'm sitting in the Park at the Park waiting for Stage 2 of this day and I don't know how much juice my phone has at the moment, but it'll have to do since my backpack (aka my mobile office) is in a secure location a few blocks away.

I'll start by saying I never made it to Comic-Con today. I'll check it out again this weekend, but today was (and Thursday usually is) the most awesome day of Con.

It kicked off at the press preview of the South Park experience, where we took photos, got free t-shirts, and hit up a local food truck called Asian Persuasion that had amazing spare ribs. As we were leaving, we saw the Adult Swim ice cream truck. I got a free poster for checking in on Facebook, and a button for admittance to their party tonight at Quality Social. You had to know the password- NTSF:SD:SUV- and we got by even if I jumbled the letters.

We reparked the car in a free zone and wandered back. We found the Nintendo Art & Cinema Theatre where we got free drinks, a "Limitless" DVD, and Pyles scored some Kenneth Cole cologne.

From there we hit the Wired party at the Omni. I got "glamoured" with a makeover by Tarte, we took Ka photos (a Cirque du Soleil thing), drank 901 tequila, had some TruBlood drinks from Fangtasia, and ran into our friend Tim, who kindly stowed my backpack. We also ran into DJ Artistic, who has now added me to his list for the Dexter party. There were some Acer laptops, so me and Pyles jumped on for some Casbah updates before the party ended.
We decided to circle the Gaslamp and popped in to see some monster trucks and then hit the Sega Arcade and played The House of Dead OVERKILL (in 3D). I haven't played a shoot'em up game in years, but shooting zombies was quite awesome.

After that, we stopped to use the restrooms at Hotel Solemar, ran into an old friend, and discovered a daily hosted wine hour from 5-6pm and had some sandia sangria. Sadly, Pyles has work obligations and has to judge a Battle of the Bands in Chula Vista, but I'm on to round two to see what kinda trouble I can get into. I'll upload more photos when I can and will get to my listings, even if that means an all-nighter.

Hit me up @sddialedin if you're around. Between the Dexter party, the Adult Swim party at Quality Social, The Heavy Guilt duo at West Coast Tavern, and Low Volts at the Lincoln Room, I am in for a long night. Wheeee!
Sent via BlackBerry by AT&T