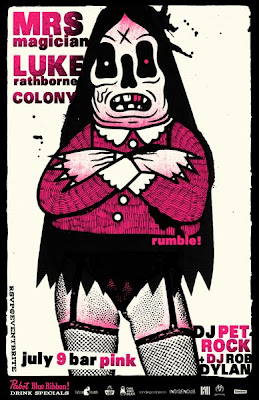 The Rumble San Diego returns tomorrow night to it's North park home Bar Pink. 2011 has been a doozy for the San Diego Rumbles, the bands just keep getting better and better and the line out front keeps getting longer and longer. Tomorrow night should be no exception, featuring performances from local surf/garage maestro's Mrs. Magician, New Yorker Luke Rathborne and SD shoegaze purveyors Colony. DJs Rob Dylan (a certain employee from M-Theory Records) & Pet Rock (....from Moviegoers) will be spinning before and in between sets.

Mrs. Magician first burst on the scene in 2010 and have made waves fast with their brand of doom and gloom surf/garage/post punk. Having opened for the likes of J. Mascis, Jeff The Brotherhood, Crocodiles, Paul Collins (The Nerves, Breakaways, The Beat) these guys have hit the ground running and aren't about to let up. You can purchase two 7"s tomorrow night The Spells (Loud & Clear Records) and There Is No God (Thrill Me Records) and if you're lucky you can probably buy them a beer! Watch the video for "Tabloids" here..http://vimeo.com/24577994

New York singer/songwriter Luke Rathborne may be only 23, but the man sings haunting dark and delicate pop that is beyond his years. Managed by The Strokes management and with his career just starting to bloom, Luke is going to have a great summer!

Super sludgey shoegaze ala Sonic Youth met with 80s influenced synths reminiscent of Joy Division and The Cure, this four piece, led by Danny Brown, are fresh off their mini West Coast tour with Primitive Noyes. Formed in 2010, Colony take thrashing garage rock and inject it with enough psych pop flourishes to create their answer to art rock. Think Explosions in the Sky, but bigger and louder.

DJs Rob Dylan & Pet Rock will be on the decks all night spinning ear candied treats for you to dance to. Remember The Rumble is free, so kindly tip the hard working folks behind the bar at Bar Pink and don't be a dick to the door guys. Thanks, we love you and as always The Rumble is brought to you by Future Sounds, Indigenous, Bar Pink, SDdialedin, Owl & Bear, Bedouin Vintage Collective, Friends With Both Arms, BMI, Veoba and Pabst Blue Ribbon. See you tomorrow night!
Posted by ART VANDELAY at Friday, July 08, 2011