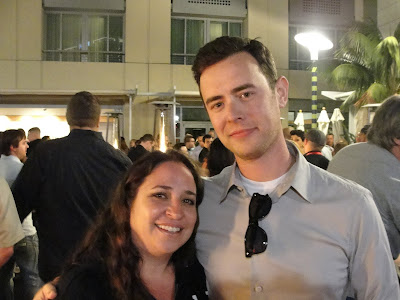 Since I already posted about most of my day's adventures, I'm just going to post the photo gallery from Thursday. Honestly, since Pyles and I spent most of the day at parties and lounges, I didn't really shoot anything spectacular; my photos were mostly for their at the moment twitter/facebook/foursquare value. I mean, how interesting is a laptop lounge to the casual reader?

I will say that after Pyles left and I went back to the Dexter party, it ended up being pretty awesome. I was alone, so I found myself a spot at the specialty drink bar in the corner and kinda just observed people as the party got more and more crowded throughout the night. The actors from the show were there, and I think a bunch of execs and producers and such were there, too, but since nobody wears nametags or badges, I was pretty clueless. I suppose that's best because you either talk to people or you don't, "celebrity" never comes into the equation. I did recognize William H Macy and Michael C Hall, and I was lucky enough to hang out with Colin Hanks for awhile, but mostly because telling him I was a music blogger lead into a lengthy conversation about music and social media and things like Pandora, Kickstarter, and Turntable.FM. By the time he left, I felt like we'd known each other forever. He's that kinda easy breezy dude.

Around 9:30 I realized I had to kick back into my real life again, so I took off (thanks to Jeff for picking me up) and went to West Coast Tavern to see Erik & Al from The Heavy Guilt who absolutely killed their set. It is so fun seeing their set stripped down. When they finished, me and Jeff popped over to Eleven and realized we'd missed the band he wanted to see so we went to Soda Bar to close the night. Even though I had to work when I got home (and am still up at 8 am), days like this make me realize that I am pretty damn lucky.