As Mike Bebee mentioned in his previous post, there is a whole slew of events going on this week for the Craft Beer Conference and the World Beer Cup taking place right NOW in San Diego! I am trying my best to find some time this week to sneak over to the conference, but I thought it would be worth sharing some of the incredible events lined up at one of my favorite bars in San Diego, O'Brien's Pub. Check the event list after the break.

Wednesday, 5/2: Firestone, Sierra Nevada and Nor Cal Night with a cask of Hollister Porter. We have a ton of great specialty beer from Northern California from the likes of Marin, Russian River, Speakeasy, Bear Republic, Drakes, Firestone and Sierra Nevada. Some of the beers are already on tap like the Bear Republic Roggenbier (Rye Beer) and Drake's Denogginizer double IPA. Tyson has been working with Sierra Nevada and Firestone to bring in some great specialty beers, so be sure to check the Facebook page for what he will be tapping that night. The cask from Hollister will be a special treat you will not want to miss. Look for Cesar's awesome Taco Night specials from the kitchen.

Thursday, 5/3: Ballast Point Smoking Hot Night. When we did this event earlier in the year for our anniversary in January, it turned out to be one of my favorite Ballast Point nights at the pub. The boys at the brewery have mixed up some very special beers for us including 2 amazing casks - Habanero Sculpin and Black Eye (Big Eye and Black Marlin blend) with Scorpion Peppers. On tap we will have Black Marlin Porter with cocoa nibs, chipotle and orange peel, Indra Kunindra Curry Stout (it has cayenne peppers in it), Wahoo Wheat with lime, ginger and red thai chilis (it makes you want to eat curry), Yellowtail with roasted serranos, Calico with dried guajillos, Smoke Screen Smoked Helles with Jalapenso (brewer Colby Chandler's faux chipotle ale - a smoked beer with jalapenos, instead of a beer with smoked jalapenos. Very clever that Colby) and finally a new creation that I am very excited about - Navigator Doublebock with dried cascabel and habanero peppers. I got to smell the dried peppers for this beer and the dried fruit aromas were insane, I can't wait to try it.

Friday, 5/4: Artisinal Imports Night with La Trappe, St. Feuillien, Bosteels, Urthel and Bockor (makers of the Cuvee des Jacobins). Unfortunately, Lodewijck from La Trappe is sick and did not travel to San Diego for the conference. So I am working to see who will be at the pub representing the breweries. Look for more updates later in the week on Facebook and Twitter. We will have lots of great draft beer and several batches of the La Trappe Barrel Aged Quadrupel no matter what along with the very tasty St. Feuillien Grand Cru, which is on the bottle list now.

Saturday, 5/5: Green Flash Day at the Pub. We have a number of great specialty beers tucked away from this wonderful brewery including Winter's Folly, Imperial IPA, West Coast IPA, Hamilton's 5th Anniversary Ale, Barleywine and bottles of the delicious Rayon Vert (Green Flash in French). We will also be getting a keg of the Founders/GFBC collaboration White IPA and Chuck just might send a few other goodies our way as well.

I am probably going to stop by the Firestone night tonight but considering I just moved to Normal Heights, I am also thinking about jumping on the free bus that will be cruising to all of the amazing craft beer bars down in North and South Park! Here's the flyer: 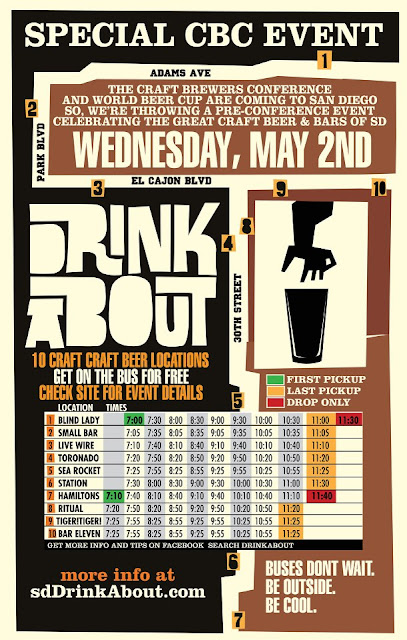 Hope to see ya here or there!

Cheers,
Charles Eck
Posted by SDBeerGeek at Wednesday, May 02, 2012