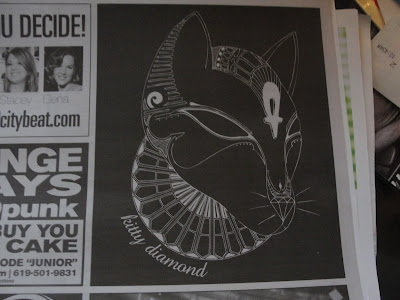 If you were paying attention, you might have noticed a quarter page ad in last week's CityBeat. The ad featured a cat with diamond shaped eyes (kinda reminded me of those kitty stickers sold in the sticker machines at 24 hour taco shops) with small writing under the collar that just said "Kitty Diamond".

Last week I ran into Gabe Vega at the Hard Rock Hotel for SoundCheck at 207, and he said something about "the new spot" and how he can't wait to book bands again and how it would be kinda "how the Beauty Bar was when it first started" and of course my eyes and ears bugged out, but he said he couldn't say anymore because it was premature and he didn't want me to go blabbing. Well, Kitty Diamond is almost here, located at 3780 Park Boulevard just south of University (formerly/currently The Flame).


I was sure that I wrote about the Flame closing, but since I can't find my reference, I'll just say that the iconic Hillcrest bar on Park has been under construction for some time, though Sabbat has continued throughout the renovation. A redesign by Bells & Whistles (responsible for places like The Loft at UCSD and Starlite, among many others) is approaching completion, and queen of promotion May*Star is already preparing an event there on May 19. May has already written a review on Yelp:


Erica Jessup (original manager of Beauty Bar, U-31, and Voyeur when it first opened) is opening a new venue.
It's being designed by Bells & Whistles!!
I've seen the blueprints and the ideas for the venue, and I've seen some of the construction...It's going to be amazing!
There are going to be TWO rooms of different music! The front room is being built for DJs, and the bigger back room works for DJs, bands, and fashion shows.

I wasn't sure what was supposed to be out publicly and what wasn't, so I emailed Erica Jessup for comment and this is what she had to say:


Front room of the night club is dancing and the back room is live bands and dancing or dancing girls (burlesque show). Both rooms have bars and it's 21 and up. The north side of the building will be done with construction in July and that's just a cool dive bar called The 40th Door with rock n roll, free web, books, craft cocktails, jukebox, and sometimes DJ's.  Then we will be working on a indoor/outdoor smoking patio that will be done by the end of July. So basically I have three bars all in one. We are keeping the old Flame sign on-top of the building for the neighborhood. Kitty Diamond will be open for Sabbat on Saturday, May 11 but (it will still be referenced as the Flame).

Erica also said the soft opening will be on May 18. From then, scheduled events include Thursday nights for "Manntar Minor" with happy hard-core dance music in the front room and dubstep in the back room. Starting at the end of May, Lady Dottie and the Diamonds will perform on Mondays. And like I said, you can expect that you'll be hearing from some old friends like Gabe Vega and Saul Q as DJs and certainly some promoting and possible booking. Also expect it to be open for a month or two (at least) before an Official Grand Opening celebration.
Posted by Rosemary Bystrak at Wednesday, May 02, 2012