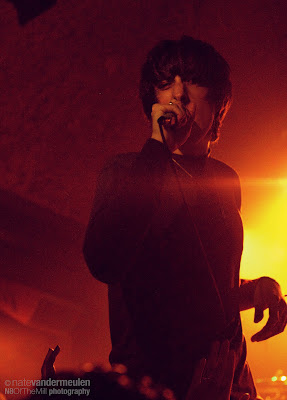 Between their back-to-back appearances closing Friday night in the Gobi tent on consecutive weekends at Coachella, The Horrors and The Black Angels made the short haul west to Solana Beach to treat a sold out Belly Up to an evening of guitar and synth- driven psychrock.  More words and photos below.

An early arrival went for naught as this Thursday night show was packed well ahead of openers The Black Angels making an appearance on stage.  The last time that the Austin-based five piece played San Diego was on this same stage as openers for Black Mountain.  That show had a different tone from the get go as lead singer Alex Maas was electrocuted through his mic and almost walked off stage before things even got underway.  Managing to avoid a similar mishap, the band wove its way through a lengthy set.  The crowd was definitely into it from the get go, and even moreso by the time the band started packing things up.  Those who have been to a sold out show at the Belly Up know, with a younger crowd in attendance- this can be both a good and bad thing... 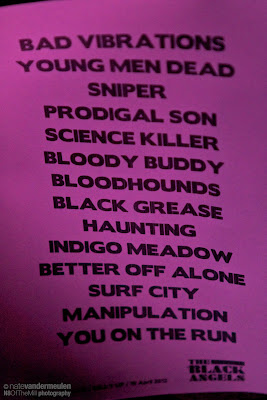 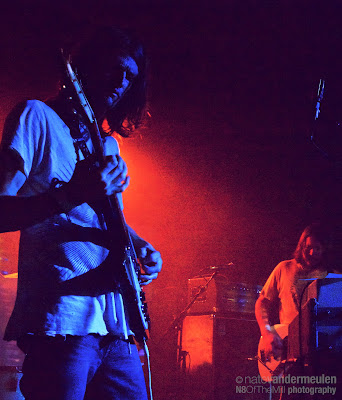 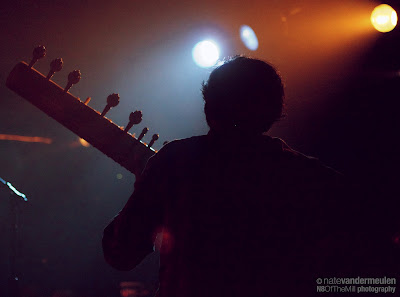 Towards the end of the opening set, I decided to see how much freedom my photo pass allowed me and was bouncing all over the venue.  I ended up in the VIP balcony where Horrors lead singer Faris Badwan was watching his tour mates' set in solitude, quietly brooding behind his Ray Bans.  I approached him briefly, only to introduce myself and congratulate him on the previous weekend's set in the desert.  Though it doesn't necessarily translate when you're standing far away from the stage (as was the case at Coachella) that dude is TALL, like the tallest Englishman ever tall.  Despite his intimidating size and appearance, he was very approachable and thanked me for coming to see the show.  As he left for the Green Room to prep for the show, I made my way back downstairs to begin my pointless attempt to get back to the front of the stage.  However crowded it was at the end of The Black Angels, the crowd had seemingly grown exponentially and it was clear that this was going to be a rowdy one.  Once I tracked down my buddy and used him as a base to plot my slow progress forward I discovered that it was probably not worth my effort to squeeze the ten feet further towards the stage.  After sliding in front of one girl I was doused with a healthy splash of beer directly down the middle of my back.  A little closer to the stage I was greeted by a strange duo consisting of a 6'-5" dude with dreadlocks and sunglasses and his 5'-6" bodyguard who welcomed my attempt to move forward by asking me 'Do you want to die tonight?'.  This was 20 minutes before the Horrors took the stage.  One thing that remains a constant about the Belly Up- you never know what kind of crowd you're going to get.

Once the show got under way, the crowd went quickly from an enthusiastic mass, cheering the presence of the headliners, to a whirlwind of girl fights, 'mosh pits' (read: dudes running at each other, fists flying) and not much attention being paid to the performance with the exception of the people within five feet of the stage who seemed happily oblivious to the madness going on behind them.  The show itself was solid, leaning heavily on last year's Skying while touching on some older tracks as well as (I think) a couple of yet to be released songs, but the night was definitely marred by the collection of idiots, dipshits and douchebags in attendance. 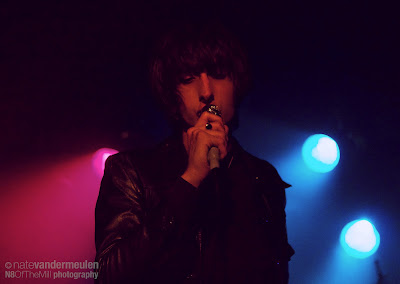 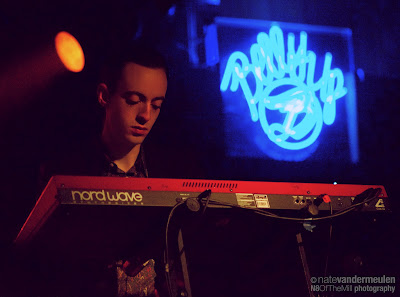 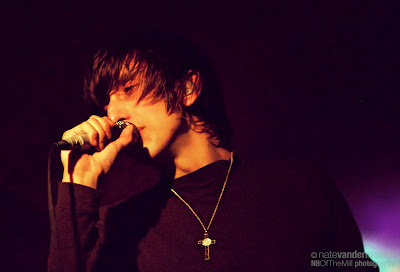 More photos from the evening here and other concert photography here.

Email ThisBlogThis!Share to TwitterShare to FacebookShare to Pinterest
Labels: belly up, Nate Vandermeulen, The Black Angels, The Horrors