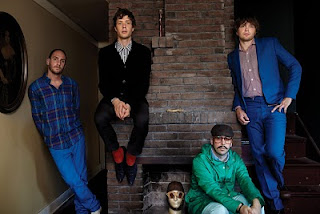 I won’t pretend like I had any clue what I was getting myself into when I was asked to talk to one of my favorite bands. I literally started listening to 24 hours of nothing but their records to try to figure out what to ask them. OK Go not only changed my outlook on music, but has been in the most coveted spots in my sun-shade since their first album was released in 2002. (I picked up their album in 2003.) But for those of you who are reading and don’t know who they are yet, here’s a couple reasons why you need to come out to their show on the 22nd at House of Blues.

They’re the guys that did that thing with the treadmill on youtube… You know that video right? Well they didn’t stop there, they also did that thing with the wallpaper, the boy band dance, the marching band and the giant machine doohickey. There are absolutely no words that can actually do justice to what I’m trying to say, so just watch their videos… (but don’t forget to comeback and read the rest of the article in a half hour!!!)
http://www.okgo.net/media/videos/

Welcome back… I told you they were awesome… but even before they were a world-wide internet sensation, they were fans of art. I had the chance to speak with Tim, the bass player, and even though they were running incredibly late, he took time out of his busy schedule to talk with me about music, art, and who to pick on my fantasy baseball team.

Tim and Damian (Lead Singer) have been obsessed with making art together for over twenty years. Which makes sense because Tim said the best description of their music that he has heard is “Arty Party”. Tim says, “Sometimes our songs are happy, sometimes they are sad, sometimes it’s a 29 dimensional representation and reflection of 7 different types of emotions… But we always try to write down our best and wildest and craziest ideas and kick you in the gut. Whether it’s a happy kick in the gut, a sad kick in the gut or a combination, we always hope that people will pick up on that.”

I didn’t want to focus on the “Treadmill” video, because it’s probably all that they had to answer on when traveling from town to town on their last 21 month tour. But Tim had nothing but great things to say about being a “Youtube Sensation”. “It’s become a wonderful space to put things that we’ve always done… We didn’t realize that it was going to be as huge as it was. We had just made up a dance to do at the end of our shows to amuse people, and our fans started doing the dance back to us. When we saw that it was such a viral and great thing, we tried it on treadmills.” Damian’s sister is also really into art, and came up with the choreography for all of their videos.

They’ve been name-dropped by Common, drawn on the Simpsons, featured on The Colbert Report and the Late Show, and to Tim’s knowledge, no one has been injured trying to dance on treadmills. But they’re still not done.

Their new video for “When the Morning Comes” has a Rupe Goldberg machine that took over six months of planning and work to entertain fans for about 4 minutes. “We’ve created a very special community that is built on these types of ideas, and we have some of the most creative and best fans in the world that really enjoy making these types of things as much as we do. We tried to keep most of the materials simple, and most of the parts are easily found in a thrift store…if your mom wanted to make this, she could… if she wanted to…”

The latest news from the band is that they have split from their major label and started their new label, Paracadute. “I think record labels are interested in one thing, and one thing only, and that is making money. We’re not as interested in that. We just want to make art. What it means to be a band in the 21st century is different than what it meant in the 1970’s. We’re having to be creative with distribution methods because people aren’t buying CD’s anymore… We are recording every show, and you can buy the show you just saw on a USB drive that’s shaped like a domino (in honor of the Rupe Goldberg machine) and the fans get the whole show five minutes after we’ve finished. This is something that we didn’t have the ability to do before that seems like a great idea.”

My last question was about their new album, “Of the Blue of the Colour of the Sky“. I had heard them talk about it on the Colbert Report, and wondered what the band thought of their new record. Tim said, “The process of making this record was so different that it makes me feel confident that we have been able to just write exactly what we feel, both musically and lyrically. It’s a record about hope. We wrote it in a rough political time, and the beginning of a tough economic time and it has made us very reflective. To me, it is reflective of how we hear music, and less about how we know how to play it. More than any of our records that we’ve made, this is a record that I like to listen to.”

Although he’s never had a “California burrito”, Tim said that he would definitely have to try it when they were in town. They’re extremely excited about the show, and you can definitely look for me up in front geeking out all over again.
You can buy tickets by going to http://www.houseofblues.com/tickets/eventdetail.asp?eventid=55621
Posted by JoshDamigo at Friday, May 14, 2010

Tim Nordwind of OK Go will perform with the Armando on Monday, June 7th at 8 pm at the iO West! Tickets are just $20!

The Armando Show begins with one suggestion from the audience, which is then interpreted by that night's Armando (OK Go's Tim Nordwind) through a personal and truthful improvised monologue. Inspired by that monologue, a cast composed of veteran Chicago and Los Angeles alumni perform scenes which, in turn, inspire a response from Armando. This propels hilarious interchanges between Armando's monologues and the company's scenes.

This event is 21 and over. Any Ticket holder unable to present valid identification indicating that they are at least 21 years of age will not be admitted to this event, and will not be eligible for a refund.