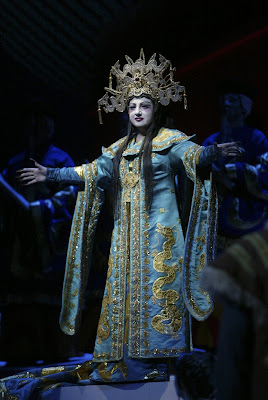 On Saturday night, I had the great pleasure of attending the opening of Turandot to kick off the 2011 season of the San Diego Opera. I hadn't been to an opera since probably junior high, when local schools would be invited for dress rehearsals and me and my rebellious friends would sneak out during the first act and sneak back in by the third, opting to run around downtown in our fancy clothes for a couple hours. So for all intents and purposes, this was my first time watching an entire performance from beginning to end and I gotta tell ya, it was pretty incredible.

From the press desk:

San Diego Opera’s 46th International Season opens Saturday, January 29, 2011 with Giacomo Puccini’s grand opera, Turandot and the exciting Company debut of American soprano Lise Lindstrom in the title role. Of Lise’s house debut as Turandot at the Metropolitan Opera The New York Times reported, “she sang with chilling power and nailed the top notes. Her sound was impressively focused, with a vibrant vibrato on sustained tones and no wobble. The youthful shimmer of her singing was balanced by rich emotional maturity.” These performances also mark the return of Albanian soprano Ermonela Jaho as the slave girl Liù and the return of San Diego favorite, the Uruguayan tenor Carlo Ventre as Calàf. Rounding out the cast is German bass Reinhard Hagen as Timur, American baritone Jeff Mattsey as Ping, American tenor Joel Sorensen as Pang, Taiwanese tenor Joseph Hu as Pong, American bass baritone Scott Sikon as a Mandarin and American tenor Joseph Frank as Emperor Altoum. Persian stage director Lotfi Mansouri continues his long history with the Company, and Italian conductor Edoardo Müller brings his mastery of the Italian repertory to the podium.

As a total rookie, I'm not really sure how to "review" the show. Though I see live music nearly every night of my life, I have no basis of comparison to comment on the skill of the vocalists. Do I comment on the simple story by reviewing Puccini? Not really sure that's the point, either. However, for the sake of my readers who think the opera isn't for you, I'll just go with this in terms we can understand. And not to diminish the art of the opera, because all of it really was spectacular, my breakdown/synopsis of the show is after the jump (I don't need to give spoiler alerts for an opera written in the 1920s, do I?).

Before you get to the jump, while the first two shows sold out, limited tickets are available for Tuesday, Friday, and the Sunday matinee. Click here to buy.

The first act kicks off with a proclamation to the people of Peking. They're like, "the Emporer's light is gonna fade if his daughter isn't married. Anyone wanting to marry the Princess has to solve three riddles." A bunch of dudes had tried but they all failed, and the Prince of Persia is the 13th to fail, so he's beheaded that very evening. In all the madness of the crowd awaiting the execution, this slave chick Liu rolls up and sees the unnamed Prince. Turns out she found his long lost pops, Timur, in the forest or something. The dad tells the Prince that Liu was the only one faithful to him, and when the prince asked why she was so loyal she's like, "well, you smiled at me once". Obviously crushing on him, the Prince is kinda this dense emo-boy and once he saw the Princess he was all whooped and never for a second considered escaping with the slave girl. At the end of the act, the Prince declares that he will attempt to solve the riddles to win Turandot's love.

During the second act, there's mostly hysteria, with the Emporer's ministers Ping, Pang and Pong lamenting over the Prince's decision and wondering how they got to this place in their lives that it's all death, death, death all of the time. Eventually they snap out of it and there's a slow build to the actual solving the riddle part. At this point the Emperor is like, "yo, you sure ya wanna do this?" and the Prince is relentless, even after Turandot reveals why she's such a bitchy ice-queen, saying how her ancestor was kidnapped and killed by a Prince, blah blah, so now's she's all man-hating and cold and she's never gonna give it up to him or anyone else.

Anyway, she gives him the 3 riddles: "What is born each night and dies at dawn?" "Hope", the Prince answers correctly. "What flickers red and warm like a flame, yet is not a flame?" He correctly answers "blood". So then she's like going for the impossible question with "What is like ice but burns?" and he finally answers "Turandot!" and the crowd goes crazy, but then she's still a biatch and is like "Daddy, don't sell me out! Don't make me marry him!" At this point, the Prince turns the tables, and is like, "If you can find out my name by dawn, I'll forfeit my life." Like I said, he's super emo.

By Act III we're taken through the night as people try to find out the Prince's name, with Turandot demanding that at the risk of death, nobody sleep until they find out his name so she can avoid marrying him. Ping, Pang and Pong try to get him to bounce the city and some other dudes rough him up a bit to no avail. Then townspeople drag in Liu and the prince's dad, Timur, and threaten their lives unless they reveal his name. The Prince makes a kinda weak-ass attempt for them to be set free until Liu stands up and is like, "No way. I'm not giving it up. You can torture me, but I'm only flesh and my love is more powerful than that. I will die with this secret before I unzip these lips." This is when she sings this amazing suicide aria, by the way. Turandot is like, "Really? You'll die for this dude? What's the secret of your courage and selflessness?" Liu replies, "Love" and finishes by stabbing her own chest with a dagger. The crowd is like, "Dude, that chick's ghost is gonna mess with us unless we give her a proper burial," so they carry her off and Turandot, hidden under a veil, stays to talk with the Prince after everyone else is gone. After some back and forth where he's like "why can't you love me like she did?" and Turandot is still like, "Whatever. I'm dead inside. I can't love," until he aggressively kisses her and she gets all misty and feels emotion for the first time in her life. Seeing he's winning her over, he's like "I'm Calaf".

Then it's all drama-drama where they get all gowned up in the celebratory red robes and Turandot reveals to her dad that she knows his name. "It is Love" and the people all cheer about the power of love and the final curtain is drawn.

As I said, the performances to me, an opera rookie, were pretty amazing, and the standing ovation probably meant avid opera-goers were equally as pleased. For such a simple story, the power of the music was definitely heavily emotional. For me, the whole night was an incredible experience and I look forward to the rest of the season. For information about upcoming performance, click here.
Posted by Rosemary Bystrak at Monday, January 31, 2011

Email ThisBlogThis!Share to TwitterShare to FacebookShare to Pinterest
Labels: san diego opera, things to do in san diego, turandot

Now this is the way opera should be explained to people! Thank you, that was awesome :)

Best. Opera. Synopsis. Ever. Thank you for posting this...and so glad you liked the show!