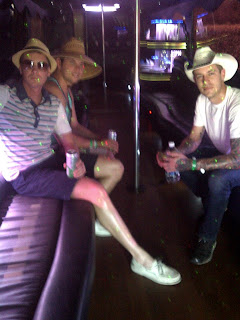 I wish there was a way to write this without mentioning the blazing heat, but the entire day seemed dictated by it. From delayed arrival at the festival to spending too much time trying to find shade, shelter, fans and a/c, and even band gear overheating (which may have been the cause of such horrific sound issues for The Big Pink), the heat ruled the day.

I'll give the short rundown because I hardly took phone photos so I can't upload anything until I'm home. (Did I mention this is the first time I've ever traveled without my laptop??)

Our day started at the pool of the MiraMonte. I ordered lunch and the boys had cocktails. At noon they had a $5 Heineken special, which is only important to mention because too many day beers meant a very lazy night for my friends. They also had 10 minute massages for $10. Pure heaven.

We caught our shuttle to Coachella, but the treatment is so ridiculously awesome that they had us wait on the Heineken party bus to have beer so they could cool down the van before transporting us. The shuttle drop off and pickup was in the artist parking lot, with an easy access to the back of the main VIP area. Like I said, completely ridiculous and amazing. You have no idea how lucky I felt.

We arrived during We Are Augustines and since we were already a few beers deep, we just kept it going. Perhaps a mistake in the heat, but we were certainly enjoying ourselves. We stayed through part of Childish Gambino. I really don't understand the appeal, but whatever.

We crossed the field to the Mojave tent for The Big Pink but the sound was terrible. I mentioned gear overheating and perhaps that was part of the problem, but something was off, which was disappointing because you could tell they were giving their all to the set. Disappointed, we decided to chill in the Rose Garden VIP area which had a large air conditioned beer tent, and a large group of people sprawled out in a corner watching Grace Potter on a flatscreen TV, so we joined them.

After some reprieve from the sun, we returned to the Mojave tent where we all agreed that The Head and The Heart gave the best set of the day (that we witnessed). "Sound Like Hallelujah" literally gave me chills and I had my first "Coachella moment" where the collective enthusiasm was overwhelming. I understand that this is why people return to festivals year after year, event after event, but it isn't really my thing, so when it does happen, it is pretty special.

When they finished, we returned to the main VIP area and caught part of the Kaiser Chiefs before deciding that we needed to break from the sun. We returned to the party bus until a shuttle arrived to take us back to the MiraMonte. Eli and I made a food run to Rubio's while the boys napped, and after a couple hours and everyone freshening up, we shuttled back and pretty much stayed in the VIP section for the rest of the night.

We found a spot in the grass and didn't move. I loved The Shins, and I thought James Mercer did a great cover of "Helpless" which was nice since I'd been watching "The Last Waltz" just a couple nights before. (RIP Levon Helm) I also really loved Bon Iver who are so exceptional at commanding an audience through all of their quiet to thunderous instrumentation, and Justin, though a superstar at this point, just seems like a regular guy you'd wanna chill with at a neighborhood bar on a any night of the week.

Radiohead closed the night and maybe diehard Radiohead fans (Radioheadheads?) loved it, but I was hot and cold on their set. I got that "Coachella moment" thing a bit with The Shins and Bon Iver but it never hit with Radiohead which was just a little disappointed since I'd definitely felt that communal elation at their last San Diego show. Doesn't matter really, because it was still a great day.

We caught our shuttle home and Dustin and I decided to keep drinking our stash of Heineken, so we found a hammock on a lawn and gossipped like teenage girls. We heard loud talking and splashes and realized some people were in the hot tub after hours. We joined them and it turns out several of them work for RedLight Management, so we chatted a bit until I was toast and had to call it a night. Dustin, on the other hand, had a crazy night, but he'll have to start his own blog for those details.

It is now 1 am on Monday and Coachella is all wrapped up. We're leaving at 6 am so I'll have to catch you up on Day 3 later. This has been so amazing, sometimes I feel like I'm living someone else's life. I guess this weekend I was. Back to reality in the morning.