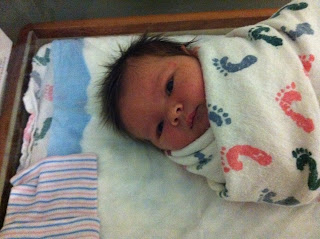 So there was awhile there where I was hanging out with Colin Clyne a whole bunch and he was gigging all over. Well, I don't know if you've wondered where he's been, but besides travelling a whole lot with his wife over the holidays and then for work much of the past three months, Fiona and Colin recently welcomed their new daughter, Catherine Clyne into the world. She was born on March 31, 2012 at 5:14pm at UCSD Medical Center in Hillcrest. Catherine weighed in at 8lbs 10oz. She was actually a few days late, but clearly she's like her Pops and wanted to make a big bang on the weekend. I know it should not have taken me over a week and a half to post about her birth, but I wanted to make sure Colin and Fiona with okay with me sharing these photos. 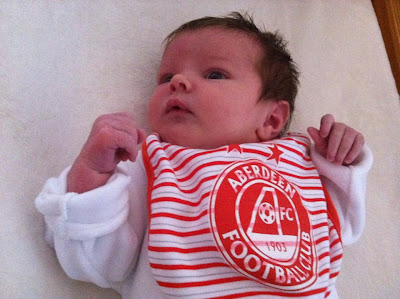 Needless to say, Colin and Fiona have their hands full, but Colin will naturally be travelling less for work and has some gigs coming up that I thought I'd share with you.

First, Colin will be busking in the Port's "Mile of Music" along the Embarcadero this weekend. You'll have to follow him on Twitter to know where and when he's playing, but he'll have at least three 20-minute sets between 2 and 5 pm on Saturday, April 14.

On Monday, April 16, Colin returns to the Lincoln Room. If you still haven't been down there, they have free music several nights of the week, great happy hour specials, and one of the cutest bartenders in town. Plus, I haven't seen Hades anywhere else in town and it's a damn tasty beer. Colin will play around 9:30.

Lastly, next weekend, April 21-22, is Adams Avenue Unplugged, which has replaced the Adams Avenue Roots Festival. Colin will perform at the Ken Club (21+) at 4:30 pm on both Saturday and Sunday.

Anyway, big congratulations to Fiona and Colin and a huge welcome to Catherine. Make sure you check him out around town.
Posted by Rosemary Bystrak at Tuesday, April 10, 2012