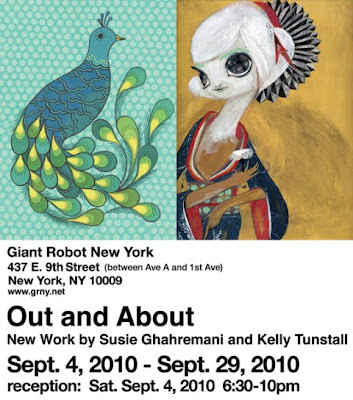 I'm not really sure exactly when I met Susie, but I'm pretty sure it was through Twitter (@boygirlparty) after I bought a phone from her brother (@spinecraft). Susie Gharameni is a resident of Normal Heights and is just an all around awesome person, but her art is phenomenal. The art has overlying simplicity but is truly meticulous and complex. Her site has beautiful gifts, so much so that some asshole stationary company tried to bite her style. She's been featured all over the place, in design mags and on the front page of Etsy and most recently in Real Simple, and this weekend she'll have 50 paintings at the Giant Robot New York gallery. You can check out some pictures of a few of the pieces here.

I know most of this info probably doesn't help my friends in San Diego, I happen to know a few people living in NYC who should check out the show. Plus you can buy her goods anytime you want from her online shop.

For the full press release, click 'keep on reading'.


Giant Robot is proud to present Out and About, featuring new works by Kelly Tunstall and Susie Ghahremani.

Kelly Tunstall's experimental yet classically grounded portraits of stylized, leggy female figures with their pets, prey, and powers live in a captivating space between concrete reality and the dreamscapes of the supernatural. Integrating graphic expression, stylized representation, surrealism, and sketch, the California College of Arts and Crafts graduate has shown her work in galleries across America, Europe, and Japan.

For Out and About, Tunstall promises 20 to 30 original works capturing the magic of the mundane, with stylized representations of the people she encounters in her everyday life--"all ladies and most wearing fabulous necklaces." Using acrylic, pencil, pen, and ink, Tunstall explores the charming incongruities of the modern and not-so-modern woman.

Susie Ghahremani creates patchwork-inspired illustrations that are simple in design, complex in execution, and all-around pleasing to the eye. In addition to making two-dimensional art, she crafts tote bags, buttons, wallets, stationery, and other goodies. The RISD graduate has contributed work to Nickelodeon, Chronicle Books, and The New York Times, and was featured in the 2010 The Exquisite Book art book.

Inspired by patterns, crafts, and the natural world, Susie is creating super-detailed works for the show. Including a series of framed works, miniatures, and a few paintings on wood, the cool, retro-colored collection will also feature paintings from Susie’s recent stationery collection with Chronicle Books.

Giant Robot was born as a Los Angeles-based magazine about Asian, Asian-American, and new hybrid culture in 1994, but has evolved into a full-service pop culture provider with shops and galleries in Los Angeles, San Francisco, and New York City, as well as an online equivalent.

Artwork for Giant Robot shows is always made available online the following week. Check back on grny.net for available work.