Where Have You Been?: A Weekend Recap 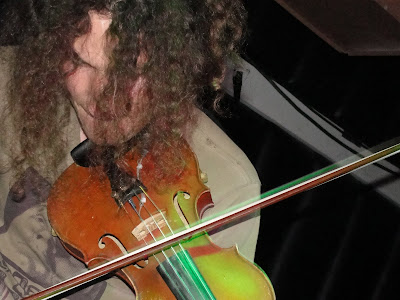 Over the weekend, I had three people tell me they missed me actually writing. I tweet and update all the time, and I do little headers here and there, but I've maybe gotten more self-conscious about bleeding my whole life on the internet. But today I feel like writing. Some psychotic person is harassing my family and friends on Facebook and some other looney is harassing my friends while some troll feels the need to berate me on Twitter, I guess mostly reminding me that I live out loud and gushing about my life is what I do. To read all about it, click 'keep on reading' at the end of this post.


So I'll say it was a brilliant weekend for me. And by "weekend", I'll start with Thursday. After I went to the zoo for the Galapagos Turtle event, I headed to the Hard Rock Hotel for the San Diego Music & Technology Conference. I mostly sat in the back as I listened with one ear as I tried to get some work done on my laptop, but I found the panels to be interesting and informative. Electronic music and the culture are things I try to understand, because even as the panelists agree, watching someone turn knobs or push buttons is insanely boring, but the discussions about new technology and instruments and the innovation around that world were incredibly fascinating and I was happy to be there. I even won a prize from SoundCloud that I gave to Josh, but apparently it would serve me better as a blogger than he as a musician, so we'll see what it entails and I might look into using it here. 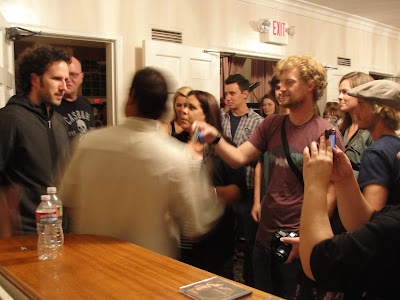 After SDMT&C, I headed up to the San Diego Woman's Club. I was selling merch for Mason Jennings and I got there an hour before I had to be there, but was able to catch Mason soundchecking on the grand piano, which was pretty amazing considering there were only 3 other people in the room. By the time we opened up, Mason played for about 90 minutes, after which he stayed until the very last person got a photo and autograph. I was joking all night that Mason Jennings deserves his own chapter in Stuff White People Like which is not a criticism, but there was a very specific demographic at the show. Coming from an advertising background this fascinates me; it's something I pay attention to regularly.

After the show and the final autographs, I made my way to West Coast Tavern, where Brett from Emersen had finished his set and Republic of Letters were setting up. They played a stripped down set without Nick on drums, and though I love their full sound with the whole band, it was great hearing this iteration of the band as well. After the set we stuck around a while before calling it a night.

On Friday morning it was back to the Hard Rock Hotel for the San Diego Music & Technology conference. They had a great social media panel that went above and beyond the usual obvious twitter and facebook information, and some rad panels on lighting, sound design, and Moldover was just fascinating discussing his homemade instruments. I had to leave before closing remarks to get to the post office before closing, but decided to wander over to Analog for happy hour. Aaron Thompson was there and he shared that he's been asked to play bass on a European tour with Fenix TX, so stay tuned for some guest blog posts as he shares his stories and adventures from the road.

After some tasty food, I went to the Casbah where I was able to see Menomena soundcheck. The show was sold out and all of the bands were fantastic, but I felt a bit claustrophobic and left during Menomena to catch Judgement Day at the Soda Bar. They totally kicked ass per usual. Afterward me and the band headed to Malinda & Jake's where they were staying and hung out for a couple hours until I called one of my favorite cabs and called it a night. 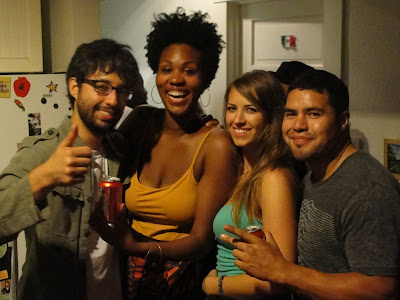 On Saturday I sold merch for the early show at the Casbah with Southern Culture on The Skids. I always forget how great this band is live and they're an absolute pleasure to work for, with all of their merch organized and they have a great wireless credit card machine which allowed for a successful day of sales, even though they were running low on merch at the end of their tour. After the show, I stuck around for some Booty Bassment before heading up the hill to the final House Party Girls party. Apparently cops had already broken up the bands, but the party was in full swing when I arrived so I stayed until the last shot of tequila was consumed before heading home (with wet feet after stepping into a small pond in the backyard). Good luck to Heather and Amanda as they jetset around the world for some awesome travel through Mexico, Thailand and Europe. We'll be here ready to party when you come back to visit.

Finally Sunday was the KPRI harbor cruise on the Hornblower with Dawes. I don't think I've ever watched videos so much in my life...these guys were so great and though in my mind I imagined big burly bearded Portland-ish duded, they're LA boys and adorable as all hell. I look forward to their full band set in November at the Casbah.

From the cruise terminal we crossed downtown to hit up Artwalk By The Bay and to see The Heavy Guilt play. If you haven't seen them perform, they're playing at the Adams Avenue Street Fair this weekend and I suggest you catch them.

After heading home and taking a nap (and realizing that my face was tragically sunburnt, complete with sunglass marks like a raccoon), it was up to the Belly Up for Local Natives. I love those kids and it was an awesome show.

Needless to say, I was completely worthless on Monday, though I went back to the Belly Up for an amazing show with Calexico and a fantastic opening band called Sergio Mendoza y La Orkesta from Tucson. Go see them when you can. I hope to get some videos up soon, but with nearly a dozen people on stage, they don't quite capture the awesome.

Last night I went to SDSU to see Phoenix and Neon Indian, and I'll post those pics soonish, too. The craziness never stops, as tonight I'll be checking out the Gaglione Brothers media party, a Pyles session with In Transit Audio, and The Jim Jones Revue at the Casbah. Tomorrow night while I urge you to go check out Meg & Bryan over at West Coast Tavern for a free show, I'll be selling merch for Dungen at the Casbah, and though I haven't completely mapped out the weekend, I know I'll be at the Adams Avenue Street Fair, at the Beauty Bar on Sunday night for their closing party (and one of a few of my birthday celebrations). Monday I'll be at the Felice Brothers who are awesome on their own, but even better knowing that there's a possibility that Conor Oberst will be there...can't ring in my midnight birthday a better way! There's a lot of other birthday celebrating happening for me next week, but make sure you RSVP for the SoundDiego Live event at West Coast Tavern next Thursday with my boys d/wolves as well as an hour of hosted Karl Strauss beer and apps. That should make for a great pre-party before heading to FLUXX for another FLUXX live show with Transfer, The Silent Comedy, Jared Mees and the Grown Children, and Little Hurricane.

and you wonder why I haven't been writing??
Posted by Rosemary Bystrak at Wednesday, September 22, 2010