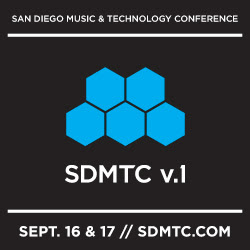 There are a lot of people involved in the San Diego music community that have attempted to put this city on the map as a center of activity. With tons of new venues cropping up, events like the North Park Music Thing, bands, promoters and more, I'm all for anything that shines a light on music in San Diego. By no means am I well-versed in the world of DJs and electronic artists, but I'm thrilled that there's an event where I can learn and broaden my palette. The San Diego Music & Technology Conference is my opportunity to do just that. This promises to be a great event with panels, showcases and parties that will bring out professionals, media, bloggers, photographers and music enthusiasts alike. You can read the full press release after the jump, check out the official site or see the official party guide by The Mixster. They've also been kind enough to extend a discount to readers of San Diego:Dialed In. Just enter 'sddialedin' at checkout and get 20% off your registration. Now where are my glowsticks?

The San Diego Music & Technology Conference (SDMTC) is the first event of its kind to celebrate the convergence between music producers, enthusiasts and technology innovators. This essential breeding ground for the advancement of electronic music on the left coast will attract electronic music artists, industry professionals, technology innovators and music enthusiasts to the Hard Rock Hotel in San Diego on Thursday and Friday, September 16 and 17, 2010. “SDMTC is an open innovation platform for the advancement of electronic music by bringing the music industry and leading technology companies together,” explains SDMTC co-founder, Roland Ligtenberg. “We wanted to bridge the gap between music and technology experts, between successful and amateur artists, in a setting that will inspire conversation and advance the industry as a whole.” SDMTC will consist of panels, workshops and showcases of the latest trends in music and technology from 10 a.m. to 6 p.m. each day. Simultaneously, poolside music events will be taking place from noon to 6 p.m. at Float, just outside the conference rooms at the Hard Rock Hotel. The evening will be comprised of networking events from 7 p.m. to 2 a.m.