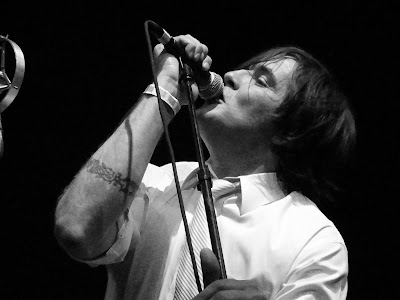 I've attempted having several blog contributors and every once in awhile I'm impressed with the surprises they have for me. Sometimes I find out band news from reading my own site because Drew Andrews or Steve Poltz or Matt Molarius post some added news that I haven't heard before.

At other times, they run off into their own little world and it's like pulling teeth to get information. Still, I knew some big news was coming for Transfer for a while and earlier this week they finally announced on their Facebook page that they will be heading to Europe to support Brandon Flowers on his tour.

UK tour in October with Brandon Flowers!! We are to be heading back to Andy's motherland to support the very talented Mr. Brandon Flowers. We are super excited!!! First date Oct. 12th in Glasgow. Details to follow soon...

A couple weeks after their September 30th show at Fluxx (with The Silent Comedy, Jared Mees & The Grown Children from Portland, Little Hurricane, and DJ Claire), they'll be heading off to the UK for at least six dates supporting Brandon Flowers (of the Killers).

Here are the confirmed dates:

It's no secret that there are many local ties with The Killers... my high school friend Dave "Fiddy" was a sound tech with the band for several years, Ray Suen played with the band for their final tours (which he blogged about here on sd:dialed in), and some of The Silent Comedy and photographer Rich Cook have have all joined the band on tour in Europe. Killers guitarist Dave Keuning has been hanging out at the Casbah quite a bit these days, too. I'll be checking out the new White Horse Recorders studio next week, so maybe I'll get some more info out of the boys. Until then, my sincere congratulations to the band. This is a huge opportunity and all I can really say is that it's about time.
Posted by Rosemary Bystrak at Friday, September 03, 2010