Where To Be: Upcoming Events in San Diego

I hope everyone had a great Labor Day weekend. Now it's back to work and I wanted to share some upcoming events, some that I've booked, some I'm involved with as a sponsor or partner, and some that I'm just endorsing. 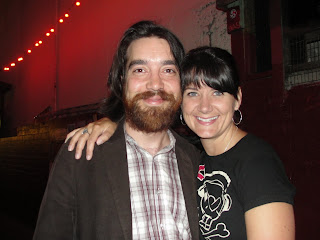 Perhaps you heard about a little bar bet that went down last month? If not, the short version is that my (sddialedin contributor) Bonnie dared Seth Combs to get a Justin Bieber haircut. The result was a bet that would raise money for the San Diego Humane Society and get the boy to lose the hair if we reached a donation goal of $300. If we reached $700, he'll also lose the beard and facial hair, and let's face it, there's probably plenty of spare change hiding in there already. To celebrate the occasion, we're having a party during Hipster Happy Hour (how fitting!) at U-31 on Wednesday, September 8. The event is FREE, but donations to the San Diego Humane Society will be accepted. The Belly Up has donated tons of tickets to upcoming shows (first come, first serve) and there will be drink/food specials ($3 u-call-its, $1.50 fish tacos). The event starts at 5pm, with performances by Long Live Logos, Gregory Page, and Rob Deez & Josh Damigo. Most important, Seth will get his haircut onstage around 7pm, so bring your cameras. Check out the Facebook Event Pagefor complete details and thanks to everyone who has already donated to reach our goal.

I've got some great bands lined up for the rest of September at West Coast Tavern and I'd love for you all to come check out the free music and have some of their fantastic signature cocktails and delicious food. This Thursday, September 9, we have Melly Frances & The Distilled Spirits. On September 16, Emersen will be sharing their jazz infused indie rock, and on September 23, up and comers Meg & Bryan will take the stage. Again, these shows are free and bands usually kick off around 10pm.

We're also working on September 30 at West Coast Tavern which will be a joint event with SoundDiego.com as well as my official birthday celebration with d/Wolves. This one will also tie in to 30th on 30th, so we might kick it off a bit earlier. I'll update with full details as we confirm, but plan on dropping by before Fluxx Live, Pete Yorn at The Belly Up, or Fountains of Wayne at the Casbah.

This Saturday night, "The Rumble" is back at Bar Pink. This month features Dale Earnhardt Jr. Jr and Jamuel Saxon. As always, the show is free and will feature $3 Trumer Pils. DEJJ is getting a ton of buzz and you won't want to miss them. Unless, of course, you're at the Casbah for the Henry Clay People. Super tough call and I can't blame you if you're feeling as torn as I am.

Finally, this Sunday is the San Diego Music Awards. Tickets are nearly sold out, so get them now. The official after party will be at Riley's and have live karaoke with Geezer.
The after party is free to all and is 21+.

As always, thanks for your support and for reading San Diego: Dialed In.
Posted by Rosemary Bystrak at Tuesday, September 07, 2010