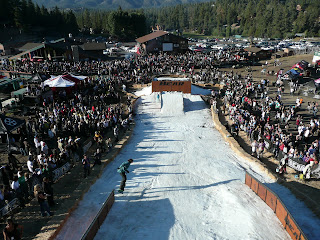 When you live in beautiful sunny San Diego, it's hard to already start thinking about things like "winter" and "snow", especially since we still haven't really even had any blazing summer days this year, but this weekend there's a pretty great event for snowboarder and ski enthusiasts.

Hot Dawgz & Hand Rails is the kickoff party to the 2010-2011 ski/snowboard season. The event is free and open to the public, though the competition itself is a pro-invitational. There are trick contests and the like, as well as vendors and drink specials and such for those 21+. They're also screening a couple movies at sundown, so it should be a nice day on the mountain if you feel like a short weekend roadtrip. For more information and the complete press release, click 'keep on reading'. 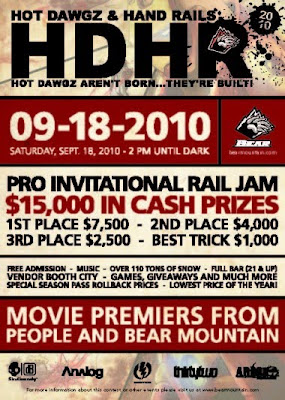 Hot Dawgz & Hand Rails (HD&HR), the official kickoff to the 2010-11 Southern California ski and snowboard season, returns to Bear Mountain ski area on Saturday, Sept. 18. The free event features some of the world's best pro snowboarders competing on 110 tons of snow for a shot at the $14,000 cash purse in the Pro Invitational Rail Jam. The Red Bull Best Trick Contest will offer up an additional $5,000 for the men's winner and $1,000 for ladies, bringing the total contest purse to $20,000.

The event also includes a vendor booth city offering autograph signings and product giveaways, live DJs, BBQ and the Beach Bar for those 21 and up featuring drink specials from Effen Vodka. The world premieres of two snowboard films, Bear Mountain’s “Paint It Red” and The People’s “Cheers,” will be shown at sundown.

“HD&HR has grown year after year, becoming the official kickoff to the winter snow season,” said Chris Riddle, marketing director for Big Bear Mountain Resorts. “It’s the biggest pre-season party in Southern California and the place to see and be seen.”

HD&HR is free and open to the public; however, the snowboarding competition is for invited, professional snowboarders only.

Email ThisBlogThis!Share to TwitterShare to FacebookShare to Pinterest
Labels: bear mountain, events, things to do