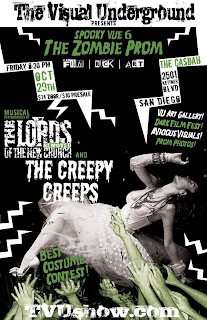 The dirty pirate hookers of film+rock+art are back. I cannot tell you how surprised I am to be doing another show as a member of The Visual Underground. I can even go as far as to say that at one in my life I swore I would never do one again. Well, like the oath I made about never drinking again, I broke my promise.

It was 2003 (or 2002), when Gavin Allen and myself (John-Ryan Shea aka AVicious), then film students at San Diego State, went to Sundance to work the NoDance Film Festival. Gavin was a pompous ass I knew that like Billy Wilder movies and looked like a reject from a Chico State catalog. Trying to save some scratch to get there we shared the gas bill and set off on the road to independent film land. When we arrived at Sundance and got to the condo we found they had us bunking up with the preverbal "guy on the couch" and a bunch of other guys discussing the relevance of old George Lucas vs. new George Lucas - yeah, fucking lame. We tried to join in the conversation but soon said screw it and went back to our shared room to crash for the night. Well, he couldn't sleep because of the time change and I couldn't sleep because he kept farting. I would like to think that no homoerotic thoughts were part of the night but after an uncomfortable hour and half of lying there and wishing for fresh air Gavin broke the silence...

From that moment on we hit to the lily white bars of Park City and binged on the delicious 2.5% alcohol beers and doubles where we needed to pour the second shot in ourselves. Needless to say it took quite some time to garner an adequate buzz. The time allowed us to get to know each other. To dig deep and discover that going to movies about the Ramones & sitting through shitty short films is just much easier with alcohol. It was beautiful to find out that a pompous ass who likes Billy Wilder movies and a wildly attractive and yet rouged guy who likes Francious Truffaut movies could co-exist if they could drink together. Hell, they might even form a bond that would forge the beginning of what would become The Visual Underground.

Returning to San Diego with the west coast premiere of "The Ramones: End of the Century" documentary we hit the Ken Club, sold out and knew we had an awesome idea. People like to drink shit and do shit. We started at the Ken Club, moved to the Whistle Stop & were graduated to The Casbah.

Performing will be:
The Creepy Creeps &
The Lords of the New Removed Church (featuring Gary Shuffler)

The film fest continues and we surely will not disappoint - Let's just say a vampire and a menstrual cycle are part of it.

We would love to see you down there and to be part of one of San Diego's all time best Film+Rock+Art Shows (even though the beautiful and wildly talented Rosey panned one of our last shows - love you girl!).

SAVE $2 at Door with phrase "Everybody Gets Brains"