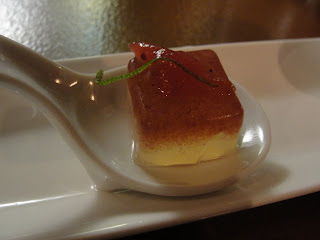 Late yesterday afternoon I received an email from an associate inviting me to a "media dinner". I've been to plenty of media events over the years...parties and events and such...they usually tray passed appetizers or food stations. This one was a first for me...I had not experienced a meal like this, where one course after another is brought out, one by one. I felt like I was on Top Chef for a minute.

Being without transportation, I didn't think I was going to get there at all, but a quick tweet and I heard back from my friend Robin Roth. We got there a little late, thankfully we hadn't missed any courses. 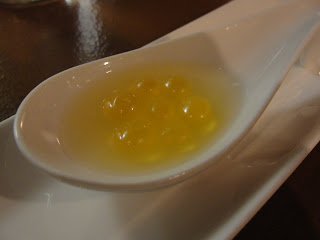 The meal started with the Roasted Squash Risotto. Just writing about it makes my mouth water. I feel like only recently have I discovered how much I enjoy risotto, perhaps that's because when it's served properly, it's delicious. When it's not it can be a sloppy, gooey mess. I didn't think I was going to take photos, so I didn't snap one of the risotto, but when the rest of the food was brought out, I couldn't keep my camera away.


We were sitting with Stephanie from con/vis and she informed us that we'd missed the opening cocktails. We were brought these beautiful gems in spoons. 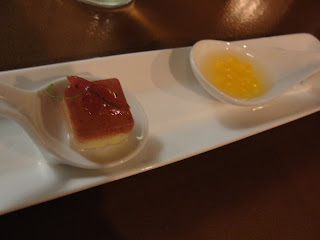 The pink/vanilla colored one was a cosmopolitan. It was almost like the consistency of a jello shot with a tad of custard. Mixologist Michael Yen makes "molecular mixes", so there's still alcohol, just not like you're used to. I was partial to the other spoon...the passion fruit margarita. It had little beads in it that popped in your mouth, kinda like boba. It was delicious. I was fantasizing about a punch bowl full of the stuff. 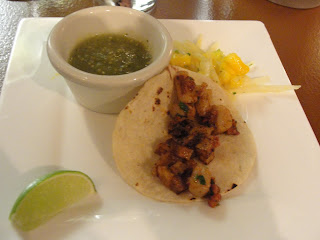 Our second food course was a chorizo scallop taco with a tomatillo salsa and a mango and jicama garnish. It was delicious but about half the size of a street taco, so it left all of us wanting more, especially with the homemade corn tortilla. Keep in mind, we were getting seven courses, so our serving sizes reflect taster sizes, not actual serving sizes if you were to order from the menu. (I double checked with Executive Chef/Owner Colin MacLaggan, just to be sure) 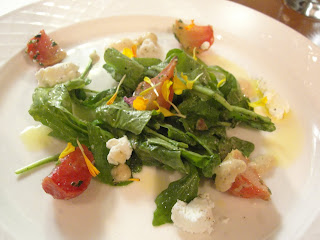 On to the salad menu, we were served Roasted Beets, served with chevre (delicious on it's own), arugula, with a porcini vinaigrette. This is probably the part where I should mention that I'm pretty sure I didn't leave a drop of food on any of my courses (except the capers on the fish). The salad was light and delicious. 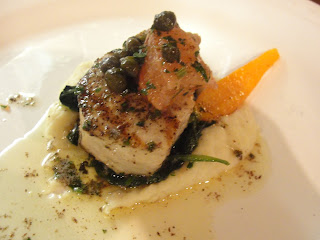 Finally getting to the entrees, we were served the catch of the day which was a beautifully flaky piece of yellowfin tuna served on spinach, mashed potatoes, carrot, and topped with a slice of grapefruit and capers. I'm not a fan of capers, but I eat enough fish that I can handle the flavoring, so as I mentioned, these were the only things left on any of my plates. 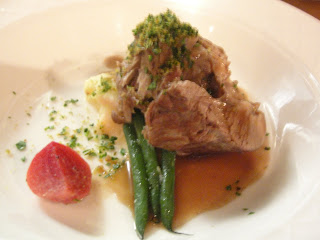 The other course from the entree menu was the braised lamb shoulder with garlic whipped potato in a rosemary jus. I don't like a lot of rosemary in my food (ironically enough), and fortunately it wasn't overpowering. I wish this photo was more flattering because though it was lamb, it was so tender it could've been mistaken for pork. No knife needed on that one. 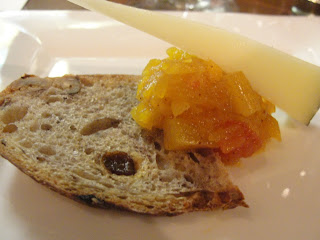 Our final courses were dessert courses. The first was a piece of manchego with poached pear chutney and a piece of toast. I didn't catch what kind of bread it was, but it had nuts in it. I love manchego and can eat cheese all day long so this was a winner for me. At the end of a meal, I'll go with cheese over dessert every time...until they brought out the butterscotch pot de creme. 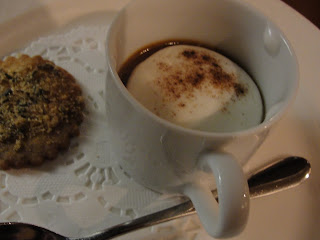 This was absolutely delicious, and if I hadn't yet reached food orgasm...well, this one hit the spot. It had a merengue foam and was served with a thin cookie that had the surprising taste of oregano. Even though this was a really sophisticated dessert, I think I liked it because the flavor reminded me of going shopping in Tijuana for certain things that were cheaper and better, like sugar and vanilla, and we'd always grab some of those little caramel cups on the way out. This was very much the grown up version of that, and it took all I had not to scrape the cup with my finger. (Who am I kidding? you know I totally did.)

Anyway, it was an awesome meal and I enjoyed the room, though I could see it getting a little loud at times. It's not often that I get to eat in restaurants in this price range, but it's good to know there are other options that I've yet to try instead of always going back to the same places. The restaurant is celebrating their 3rd anniversary, and with food this delicious, it's no wonder.

Avenue 5 is located at 2760 5th Avenue, between Nutmeg and Olive.
Posted by Rosemary Bystrak at Friday, October 08, 2010