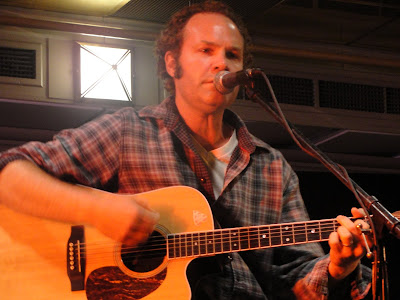 There's a chance I'll add more to this post later, once I'm able to see if I took any decent photos, but for now, I'll post the videos from John Ondrasik (aka Five For Fighting) playing aboard the Inspiration Hornblower. Apparently there was such high demand for tickets that they moved the set to the largest of the Hornblower fleet, which was nice because it enabled more people to attend the free show, but it also sucked because there are very few guys playing solo guitar who can hold the attention of 300 people, let alone almost 1000. My theory is that if people can't see the artist, the music generally becomes background noise and the talkers just take the opportunity to talk. Add to the fact that the show was on the second deck of the boat...with a low ceiling...and noisejust bounced all over the place. Personally I can say I own one Five For Fighting record. When "Superman" and "100 Years" were just catching on, my friend Mikey had just died from cancer. 6 months from diagnosis to death and as friends do after college, we saw less and less of one another, so I didn't find out until after he passed. I thought hearing the songs would feel heavy, but as you can see in the videos, John sang them slightly different, a bit more uptempo, so my emotional breakdown was averted. The set was short and from what I gathered, that's because most Five For Fighting songs require a piano instead of guitar. I don't know that I believe that after five albums that John doesn't have more than seven songs in him, but the short set allowed for time to roam around the colossal boat in the harbor and some time to hang out with my buddy Chris.

Click through the right and left arrows on the video window to see all of the songs in the playlist, or double click the video to see it in HD on YouTube.