The Low Anthem "Apothecary" live at The Autry 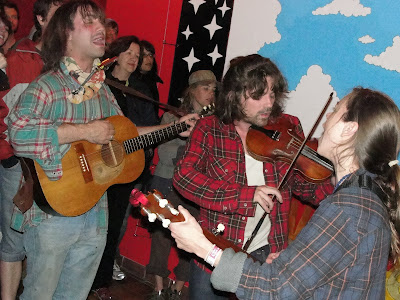 I have so much to tell you about and it feels like there's never enough time to just sit and write anymore. So until I can take the time, I'll tell you briefly about my Monday.

I fell in love with The Low Anthem when they released Oh My God, Charlie Darwin a couple years ago, and when their new album, Smart Flesh, dropped, I couldn't wait to get my hands on the record. The last time the band performed in San Diego, it was a weekend night at the Casbah and they weren't headlining, and frankly, the show sucked. Not at any fault of the band, but the crowd was chatty and booze was flowing, and they tried their best to capture the quiet needed for their show, but it just didn't ever happen. I wonder if the band will ever come back because of that show.

Fortunately, the band is touring and Jeff and I decided it was worth a trek to Los Angeles to see the band at The Autry in Griffith Park. As we do, we made a day of it, leaving early as I did my work from my phone, making calls, checking email, etc., getting dinner at Father's Office, then arriving at the show during the opening set by Daniel Lefkowitz. We weren't expecting an outdoor show, so unfortunately we didn't have blankets or pillows like the people around us, but we didn't really care...we sat on the floor up front and prepared to enjoy the show.

The weather had been spotty throughout the drive, but nobody wanted the faint drizzle to stop the fun. Daniel was fantastic, as was Ivan and Alyosha, a group from Seattle. ("You'd think we're used to the rain. We're not. It's cold.")

The stage production manager turned out to be my friend Nate Million, so we chatted until he had to hustle to cover gear in plastic and make sure nobody was in danger of electrocution. Wouldn't you know that just as we thought the drizzle had ended, The Low Anthem took the stage and the drizzle increased to rain. After a few songs, people started to stand up. I, however, didn't want the one dry spot under me to get wet, so I stayed sitting until the production had to call the show. It was too wet and too dangerous. Nobody was ready to call it a night, so the band called an intermission, grabbed their instruments, and everyone retreated under an overhang where we were treated to a completely unplugged set.

I have plenty more videos to upload, but this should hold you for now.
Posted by Rosemary Bystrak at Tuesday, May 10, 2011

Email ThisBlogThis!Share to TwitterShare to FacebookShare to Pinterest
Labels: the autry, the low anthem