Mike’s Weekly Pick: Ezra Furman and the Harpoons @ The Loft at UCSD Saturday May 7, 2011 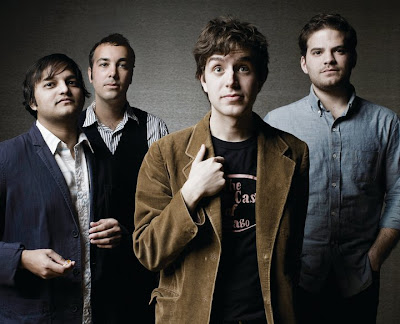 As I sit here on this sweltering Monday afternoon fondly contemplating what an amazing month April was in terms of shows, I quickly realize that May is no slouch either. In fact, this first week of the month alone promises to be spectacular. Sure, I could take the easy way out and say Fleet Foxes is my weekly pick, and while it promises to be a singularly special night, it has also been sold out for ages. I could have chosen William Fitzsimmons as your Foxes alternative, but Jeff beat me to it with his own weekly pick. No matter, because as I peep what’s coming up this week there is one show that really jumps up to grab me: Ezra Furman and the Harpoons.

I’ve personally been hooked on this band since hearing the first two tracks (“We Should Fight” and “Take Off Your Sunglasses”) from 2008’s Inside the Human Body-a couple of romping, knee-slapping, jangly, eerie, head-bobbing anthems, highlighted of course by Furman’s truly unique voice and cutting lyrics. They’re now out touring in support of the recently released (and band’s third) LP Mysterious Power, which is probably one of the top 5 or so new records I’ve heard this year. And while I could take another crack at describing the band in a "clever or insightful so as to make you want to go" kind of way, might it not be easier to let them speak for themselves? Like this, from the “bio” on their Facebook page:

Furman gallops and crashes around the stage like an asylum-bound Buddy Holly complete with endearing hiccups and frightening tics. He not only christens every tour with a nom de rock, but also titles each individual gig. Furman’s witty and effusive conversations with the audience, along with his heightened attention to the crowd’s prevailing mood and the shows named like children, creates an extremely personalized feel for every performance. The band grinds out riffs stoically and belts out harmonies spiritedly as they lay the aural ties to support the verbal locomotion of Furman as he careens and caroms about, filling the room with the boiling-hot emotional steam of a fully bared soul.

I mean, really, who doesn’t want to witness that kind of spectacle? Need more convincing? Check out this video of the aforementioned “Take Off Your Sunglasses.”

Ezra Furman and the Harpoons will appear this Saturday May 7, at UCSD’s the Loft, with Tristen and The Apache Relay in support. Do not miss this!
Posted by mikebeebe at Monday, May 02, 2011