The Black Cat Is Open For Business....and other stuff

Today was quite a productive day. After skipping two weeks of meetings, we had a lot to talk about at the Casbah today. We were stoked about the number of sell-out shows recently...The Greenhornes, ManMan, Chris Robinson, Low Volts, Pinback, and even Urge Overkill was only about 5 tickets from sell out, so we'll put that in the win category, but we have a lot of shows coming up...some, like Yelle and Jenny and Johnny and Yeasayer had tickets fly out the door, but others...well, let's just be frank...we need to move some tickets. Noah and the Whale has consistently done well at the Casbah, and we moved them up to the San Diego Woman's Club to offer a larger capacity all ages show...BUY YOUR TICKETS. The band is amazing and we want them to keep coming around. Check out this cool movie you can watch about the making of their record. Here's a free download of "Give It All Back", and check out the video of "L.I.F.E.G.O.E.S.O.N." below:

The show takes place on May 24th at the San Diego Woman's Club. Bahamas opens.

After our meeting, we had a wonderful lunch at Mama Testa. I used to think it was an Italian restaurant, but it has become one of my favorite taco shops in town and Cesar is awesome, so pay them a visit and try the fish tacos or the Buey Menso. Trust me. Their salsa bar alone is worth the trip. 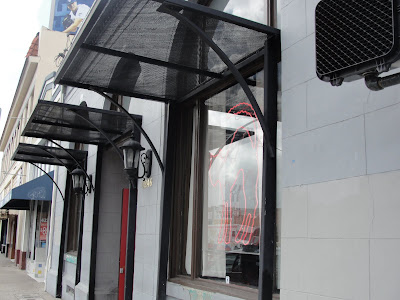 From there, we checked out the Black Cat. This is a new spot in City Heights, and the new owners celebrated the grand opening last week. It's on Van Dyke and University and is a cool spot to get you out of North Park. I say make a night of hopping from Til Two to Tower to Black Cat and then call a cab because you'll get liquored up on the cheap, or make it a pre-Soda Bar/Eleven stop. The bar is open from 11am-2am daily, has two pool tables, a loft space for private seating, some large cozy booths, a small stage (in hopes of getting a cabaret license), and they've got wi-fi (of course I asked!!). The building has been around since the 20s, was originally a bank, but has seen many bar owners since the 50s. Good luck to Matt and his new spot. Go support! 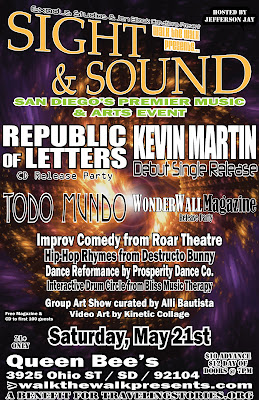 After our quick stop, we went to ArtLab, which is jon Block's office and a community art space. I incorrectly said it is the new home of Sight and Sound, but that is still gonna be at Queen Bee's. The Saturday event features Republic of Letters’ CD release party, the solo debut for Get Back Loretta’s Kevin Martin, the Spanish acoustic dance band Todo Mundo, live improv comedy from Roar Theatre, Prosperity Dance Company, hip-hop rhymes from Destructo Bunny. Open mic legend Jefferson Jay emcess. Group art show will be curated by Alli Bautista. There will be an interactive drum circle from Bliss Music Therapy. Video art from Kinetic Collage.

Tickets are $12, but if you buy them in advance, they're only $10 and include a complimentary cocktail. Get tickets here.

Just a normal Wednesday. Along the way I answered a bajillion emails, texts, picked up a new client, got one step closer to a trip to New York, and now it's time to get ready for a night out to see Federico Aubele at Anthology and The Tree Ring at the Casbah.

just another day in the life of a blogger.
Posted by Rosemary Bystrak at Wednesday, May 18, 2011

Email ThisBlogThis!Share to TwitterShare to FacebookShare to Pinterest
Labels: artlab, black cat, casbah, noah and the whale, sight and sound