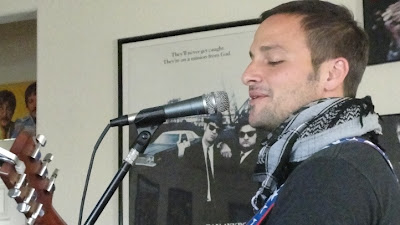 Late last summer, Jesse LaMonaca, at the suggestion of friends and family, decided to take trip to Australia. He booked ten shows and with the help of those close to him and a Canon T2i camera, he was off to the Other Side of the World. Since his return and in between his crazy busy performance schedule, he's been working with Aaron Browning of Flicker Fusion Video to compile some video diary webisodes of the adventure. The videos are FINALLY done, as is the live video shoot of the song that came from that journey, "Other Side of The World" at Lost Ark Studios in Pacific Beach.

"Other Side of the World" Live at Lost Ark Studios:


All three episodes are embedded after the jump. Go to JesseLaMonaca.com for more info, videos, photos, and free downloads of four tracks from the Dirty Thursday podcast he did about a month ago.


Episode 3- Back To Sydney