GROUPLOVE September 24th, 2011 at House of Blues with Two Door Cinema Club and The Lonely Forest 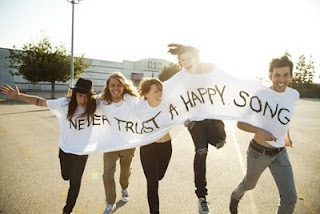 Courtesy of Grouplove and Atlantic Records

Despite the California prohibition on using cell phones while driving, I have been reaching for my phone’s music discovery app more and more on my drives home. One of my recent finds was GROUPLOVE, a dynamic five piece band whose single “Colours” has been receiving plenty of radio play. Their first full length album Never Trust a Happy Song was just released on September 13th while they have been out on a headlining tour. They have been receiving lots of press and acclaim due to celebrated festival performances at Outside Lands and Lollapalooza as well as an appearance last night on Conan to perform their single.
The band has taken a short break from their headlining tour to support Two Door Cinema Club ending in San Diego tomorrow September 24th at the House of Blues with The Lonely Forest opening. GROUPLOVE’s bouncy and optimistic energy does well to compliment Two Door Cinema Club’s jittery dance rock vibes to keep every one’s feet moving all night long. Doors open at 8 P.M. and tickets are still on sale here. You can watch after the jump their music video for the single "Colours" and their performance on Conan.