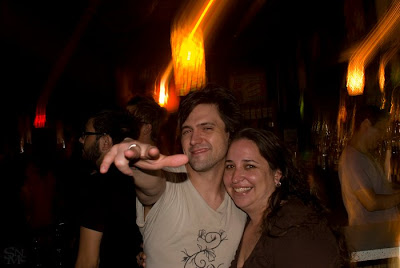 Next week, Bright Eyes returns to San Diego to perform at Soma in support of their most recent album, The People's Key.

Since 2006 the once revolving cast of Bright Eyes players has settled around permanent members Conor Oberst, Mike Mogis and Nathaniel Walcott, with additional musicians joining them in the studio and on tour. Fully realized and bursting with charisma, The People’s Key is an assured and accomplished album, artfully arranged and filled with the engaging and mesmeric songwriting for which Oberst is renowned. Recorded in Omaha, Nebraska, at the band’s own ARC Studios, The People’s Key was produced by Mike Mogis and engineered by Mogis and Andy LeMaster.

It has been just short of a year since the surprise performance by Conor Oberst at the Casbah last year with the Felice Brothers (I remember exactly that it was September 27th because I got a birthday kiss from Conor at midnight- *blushing*) and what Soma lacks in intimacy, they'll make up for with that massive stage with a full sound and Bright Eyes' usually creative and colorful lighting schemes and live projections.

With Kurt Vile and The Violators opening, there is no doubt that this show is going to be pretty amazing. I've even been talking to "friends" on Turntable.FM who have seen the tour along the way and know that fans will not be disappointed.

The show is on Tuesday, September 21 at Soma and is ALL AGES. Doors open at 7pm.
Tickets are $25 here.
For a lucky few, I am giving away three (additional) pairs of tickets between now and Sunday. "Like" my page on Facebook and leave me a Bright Eyes memory/favorite song/ on my wall and I'll pick the best comments by Sunday.

Here are a couple downloads from The People's Key: