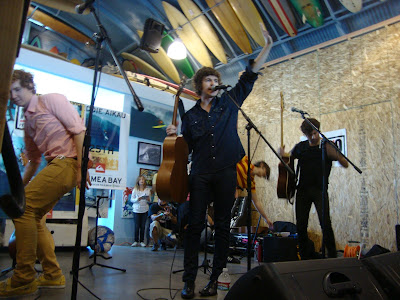 The Kooks are on a small promotional tour in support of their new release, Junk of the Heart, which means they're travelling to record stores and random spots to tease their new material. They played on Sunday for FM 94/9 at Bird's Surf Shed. The band performed a mere four songs, but judging by the amount of people who showed up (and were still showing up after it was already over), I'd say people have been waiting for this one for a while. I was just happy to hear them sing my name in the first song. As a kid, I was always sad at souvenir shops that the keychains and monogrammed tchotchkes never had my name, in adulthood this comes in a lack of song with Rosie, Rosey, or Rosemary. So thanks to The Kooks. I dig my new song.
Use the >| along the bottom of the YouTube window to see the rest of the videos.
1. Rosie
2. Junk Of The Heart (Happy)
3. Eskimo Kiss
4. Ooh La

Email ThisBlogThis!Share to TwitterShare to FacebookShare to Pinterest
Labels: FM 94/9, the kooks