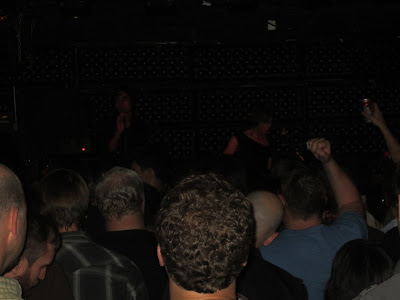 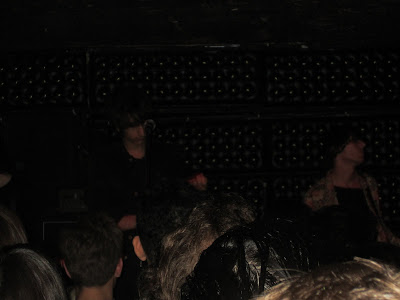 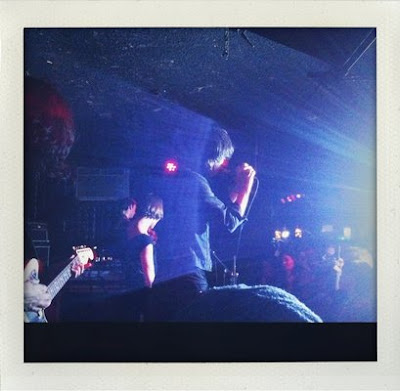 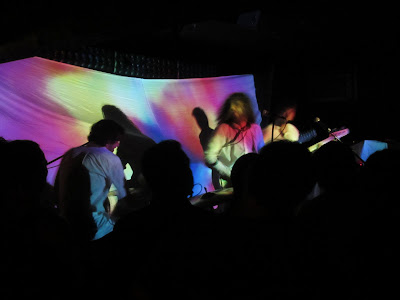 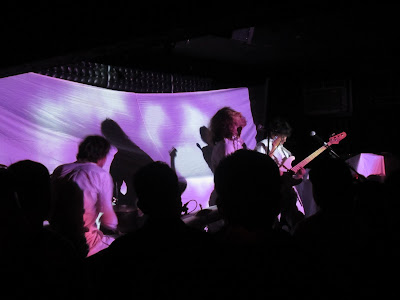 As the droves of San Diegans were descending upon Spreckels Theatre downtown Friday night for the first of two sold out shows from Bon Iver, I was headed to the Casbah to see the sold out Horrors show. It's kind of funny how both Casbah presents shows were polar opposites, the sweet sultry vocals of Justin Vernon compared to the dark menacing vocals of Faris Badwin. A contrast of heaven and hell, if you will.

I showed up to the Casbah about 5 minutes into The Stepkids set and went straight in, as I greeted Faris Badwan from the Horrors with a hello and handshake I cringed a little bit. The jazz influenced space jammy psychedelic tunes coming from the stage were just a little too much for me, especially with a white sheet behind them and projections being strewn across their bodies by ex San Diegan David Khan. The first song I heard was probably close to 8 minutes long with a 4-5 minute guitar solo in the middle. Someone tipped me that he was Alicia Keys touring guitarist, which would make a lot of sense. Don't get me wrong, they were entertaining but not my cup of tea and definitely not the reason I was there. They'll be back Sunday October 30th at Soda Bar with Trap Gold so go see for yourself.

One thing I noticed about this night was the lack of prominent faces in the SD music scene, no one was to be found ... the Art Fag set, CityBeat heads, nobody. Instead it was a handful of familiar faces and the spattering of 40-50 somethings with the usual "bros and hoes" mixed in, really random crowd for a show of this caliber. After an hour long interlude, the main room quickly filled up with everyone clamoring for a spot. Forget the spidery androgynous demeanor and spazzy mannerisms - these guys bring it when it comes to live performance, pure and simple. Their new album is a brilliant piece of work, a considerable triumph over their previous and an exciting sampling of their creative evolution. The band opened with the first song off the new album Skying called "Changing The Rain", fearlessly putting their newest foot forward in a challenge to those hung up on the band's earlier sounds. We took the evolution in stride; however, we were delightfully treated with the Primary Colours standout "Who Can Say"played second in the set, bodies writhing in motion, sweat already beginning to pour from peoples pores so early in the set. The night was young and as I was already thrilled at what I had witnessed, they moved back to Skying with "I Can See Through You". The song seemed to be a crowd pleaser and most of the attendees knew every single word to the new album. For the remainder of the night the Horrors flipped back and forth between Skying and Primary Colours leaving out any songs from 2007's Strange House. My favorite of the night would have to be a tripped out version of "Scarlet Fields" in which they had replaced the synths for guitars. If you weren't in attendance this time, the next time they return I'd definitely recommend you going. Loud, dark, brooding, perfectionists, are all words I would use to describe what I had bestowed upon me. This is a band with some serious staying power-- I remember picking up the debut EP in the fall of 2006 and to see their progression at such a young age is quite remarkable. I raise my glass to Horrors and I am proud to be a fan. Special thanks to the Casbah, the guys from Hotel St. George, Rosemary Bystrak, and Donna Chang.

Changing the Rain
Who Can Say?
I Can See Through You
Scarlet Fields
Dive In
Three Decades
Endless Blue
Sea Within a Sea
Still Life
Mirror's Image
Moving Further Away
Posted by ART VANDELAY at Monday, September 26, 2011

The set list literally flipped flopped between skying and primary colours, how democratic of them

its david pond not kahn, glad u enjoyed the show though.