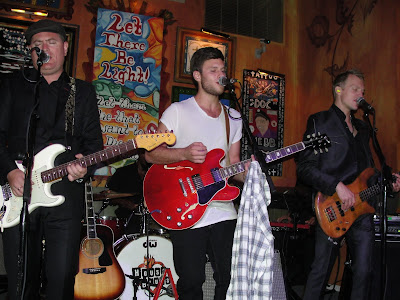 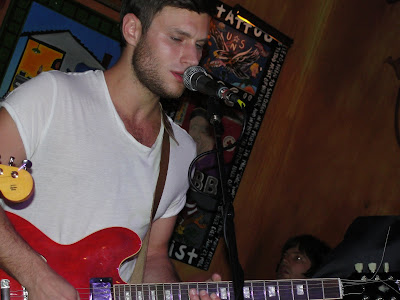 Last night I didn't have any idea what to expect from Graffiti6 except that I knew they played X-Fest earlier this summer, I wasn't particularly moved by their name, and I only listened to a few tunes Jeff played on the way to the show. "This show might not change your life, but it's free and at least it's something to do," he said.

So let's just say I went to the show with no expectations, and when we arrived around 8, the doors hadn't opened. By 8:30, there were six people there. I searched my blackberry and found a press release.:

Get ready to fall in love with Graffiti6 as they come through San Diego on September 19th playing House Of Blues!!

Graffiti6 is a collaboration between singer-songwriter Jamie Scott and songwriter-producer TommyD, both London-born multi-instrumentalists who began making music together in 2009 and decided to call the resulting collaboration Graffiti6.
...
Graffiti6’s upcoming album Colours — a genre-defying blend of pop, psychedelia, R&B, and British Northern Soul that fully capitalizes on the soaring uplift of Jamie Scott’s emotionally transparent voice and gift for melody and TommyD’s irresistible rhythms and inventive production. 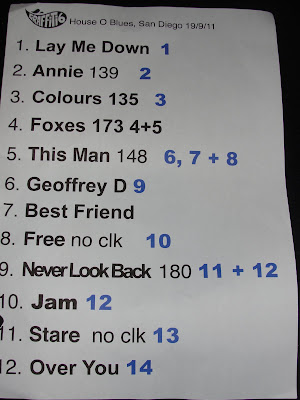 Yes, this is sometimes how I do my research. 30 minutes before the band takes the stage. Fortunately when Graffiti6 started at 9, more people arrived, and I think the 30 or 40 of us there were certainly thrilled at the hour+ show we got. I was just going to shoot a couple photos, maybe capture a couple videos. Instead, I filmed the whole set (minus one song for battery changes) and absolutely loved the band. There was definitely a One Eskimo vibe to singer Jaime Scott and I wish my camera fully captured the intricate beauty of his vocals. How does this kid from the UK have so much soul?

Anyway, the band was awesome with grooving bass lines and percussion, beautiful and fitting keyboard flourishes, and the two guitars backed with occasional synth tracks kept the music upbeat without devolving into the resurrected 80s thing that everyone is doing that really drives me up the wall. I have to say my only wish for the night was that it was more like a Casbah show...the band should've been 'shaking hands and kissing babies' and meeting and greeting everyone in the room before and after the show to really make the extra impact on the few people there so they run and tell all of their friends about the awesome new band they saw, so the next time they come around, there will be a line out the door. But maybe there will be anyway. This band was that good.

YouTube changed their playlist settings on me, so you have to click the >| 'next' button on the youtube nav bar to go from video to video. They're in the order of the setlist. Foxes was the only song I missed. Be sure especially to check out "This Man", "Never Look Back", and their very unique cover of "Best Friend". Also, apologies for the smurf lighting and everyone looking like they're from Avatar. That room just blows for lighting.

Email ThisBlogThis!Share to TwitterShare to FacebookShare to Pinterest
Labels: graffiti6, House of Blues