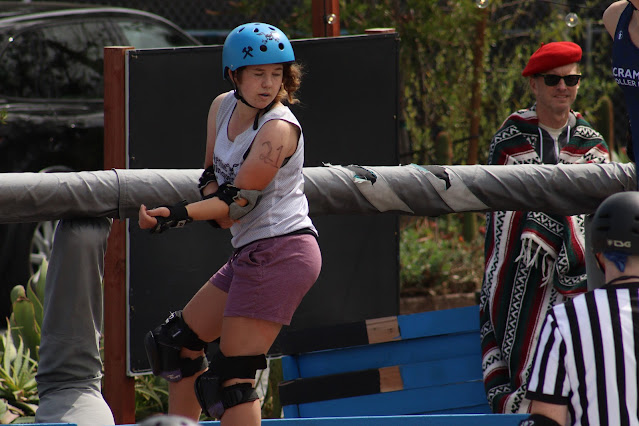 I told you on Friday that I had no weekend plans and then ended up having a busy weekend after all. Since Darren was sick, we all ended up asleep early on Friday night, which meant we were all up in time for Nova's roller derby scrimmage. It was frigid then hot then cold all over again, but we had delicious breakfast burritos and the sun popped out long enough for them to do an hour of flat track scrimmage and nearly an hour of banked track until the rain came and cut them off about 10 minutes early. After, Nova and I ran some errands while Darren rested, and then we watched murder shows until it was time to go to help my parents. By the time we were done, we were all zonked and again, I was in bed before midnight. WHO EVEN AM I?

Of course, early to bed, early to rise, so Nova and I decided to go watch my niece play soccer in the morning, did some shopping after, and then we hung in the house for awhile until our neighbor grabbed Nova for another lesson on circus school. If I didn't mention it, she's a teacher at Fern Street Circus and San Diego Circus School, and also works at various events...if you've seen stilt walkers at concerts, festivals, or San Diego Zoo & Safari Park, you've probably seen her. Nova picked it up pretty quickly and was walking all over the yard for about an hour and had a great time. The rest of Sunday was me going to my parents to get my dad out of the bed and then returning a few hours later to get him back in. Not the party weekend I had in mind exactly, but sometimes life happens how it happens and we just gotta roll with it while we have it to roll with.

If you're looking for some comedic relief from all the horror of the news, watch The Standups on Netflix Season 3, Episode 2 with Naomi Ekperigin. I don't want to spoil it, but she has some hilarious bits about San Diego and specifically, the San Diego Zoo.

Some thoughts about gas.

When I was a little kid, my parents would load us up in the camper and we'd go to Tijuana. We had a 1978 Toyota longbed truck with a camper shell on it, and the three of us kids would pile in the back as we went to TJ to run errands. We would get gas, because in Mexico the gas and oil is State owned and not subject to the same kind of OPEC cartel bullshit that we are, we'd usually get tacos al vapor in this basement restaurant I think was called La Especial, and then we'd go to Calimax to load up on things that were better and cheaper in Mexico: sugar, cinnamon, honey, booze for my parents, medicines, produce, before driving back over the border.

I was thinking about this the other day because I live across the street from a gas station and I've been watching them go up every day. I don't need to tell you that gas prices are not what we're used to. Or perhaps you've seen it on TV, since it is covered on every single news broadcast on every single network every single night. In typical times, we'd see prices go up a bit, then swing back down a bit, so you could at least skip filling up during a busy travel weekend, for example, and instead wait till a lull in the week on Monday or Tuesday for things to come back down. But in some cases, we've seen jumps by 5cents, 10cents, 20cents in a single day, without the swing back down.

But in case we all collectively blocked our memories, we experienced a global pandemic - a glut in oil in 2020 meant OPEC slowed production and by extension processing, and then things picked up slowly and then when we were ready for it to 'go back to normal' rather suddenly and urgently a number of things happened: OPEC said nah, we're gonna keep it chill because what if you shut things down again? and also we 'lost' so much money, we'd like to make up for it by getting to $100 a barrel first. And even when there was crude to import, there were no truckers to move it, shipping backlogs, and all this you already know. And now Russia, a major OPEC nation, invades Ukraine, makes not-subtle-at-all nuclear threats, and everyone is rah-rah-rah in support of Ukraine. Except if it's gonna cost us when we fill up.

This to say we can't have it all ways: we can't support Ukraine without seeing our gas prices go up. We can't get serious about climate change while using more fossil fuels than ever. We can't suddenly expect gas tycoons and corporations and vulture funds and oligarchs and Wall Street and investment bankers and politicians not to completely exploit the situation and people's desperations for financial and political gain. It isn't hard to guess which party they'd like to see in control to reverse any and all policies that could hurt energy corporations and their shareholders.

Meanwhile, just like when everyone was crying about supply chain issues and nobody in power dare suggest that maybe people chill on the consumption until things could balance out again, now we're in a quasi-gas-crisis, and people in power and people vying for clicks aren't gonna ask you to drive less because how dare they? But I'm gonna say this now: drive less. I understand people commute and that's not really negotiable in most cases. But in my own life we hold off on certain trips and bundle them with others. Shopping becomes a more committed adventure, wrapping multiple stops in one outing, or taking advantage of free shipping from online retail and grocery. We keep an eye out for lower gas and seize the chance to fill up when we can. We try to keep cash on hand, since so many stations offer a cash price cheaper than the credit/debit price. Tonight I got gas by my mom's from a Chevron station that is normally on the extremely expensive end of things because they were actually cheaper than all of my usual go-tos. I think it's because you can't find them on Gas Buddy, so maybe they actually have too much gas at the moment? Who knows? At least we're not seeing Californians filling up garbage bags of gas like we saw in the south when the Colonial Pipeline shut down after the company was hacked.

Lastly, government metrics for public transit always want you to compare bus fare with not just the cost of gas per trip, but general car ownership: wear and maintenance on your vehicle, insurance, and things a normal person doesn't ever consider in the cost of every trip we take when we drive. A lot of people have fought public transit "until the bus is cheaper than me driving myself" and now perhaps, it actually is in a more real way than ever before.

All this to say, we could be asked to sacrifice. We SHOULD be asked to sacrifice. For the health of the planet. For Ukraine. For the benefit of society around us. But it is just so much easier to show up with a camera at a gas station and let someone groan about gas prices. For clicks. For views. So all of us can feel the collective pain and be angry and miserable and feel helpless. And then just keep on filling right back up again without a second thought if we can change our lives just the slightest, knowing that we're lining the pockets of evil men exploiting this dependency for record profits and maximum suffering on all of us.

Students, staff and visitors to campus will no longer be required to wear masks indoors effective April 4. All other COVID-19 safety mitigations and protections including; air filtration, testing, handwashing, distancing when possible, self-screening for symptoms, case management, and contact tracing will remain in place.
Two weeks ago when district staff spoke with advisors from UC San Diego, the majority felt at that time that removing a mask mandate was premature, as the local COVID-19 case rate remained high. On Thursday, the Centers for Disease Control (CDC) moved San Diego County into the lowest level of concern. For that reason, we believe it is appropriate to update our safety measures at this time.
We will once again provide all students and staff with at-home COVID-19 tests to use before returning to campus following Spring Break. This strategy worked extremely well before Winter Break, and we are grateful to have enough tests to be able to repeat the process.
We will also continue to monitor federal, state and local guidelines and remain ready to return to indoor masking if our community were to enter a higher level of concern. Additional info & resources will be available on the district COVID-19 Information page.
Posted by Rosemary Bystrak at Sunday, March 06, 2022