The Horde and the Harem, Skyline Union, Jesse LaMonaca and the Dime Novels @ Soda Bar, 8.3.2011 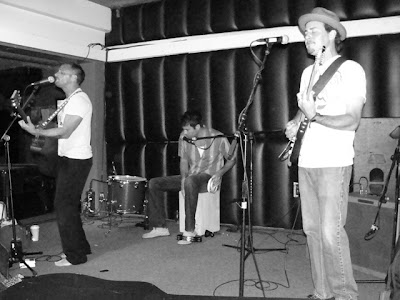 I haven't really written about a show in a while, but since there were so few people at Soda Bar last night, I thought I'd fill you in on what you missed. Before that, I'll rewind a little and say that I spent the afternoon poolside at the Handlery Hotel, where Jesse LaMonaca and the Dime Novels performed for the better part of three hours. It's worth mentioning, too, that the band is currently in the studio recording their follow up to Until The Stars Came Out. When Jesse performs...whether it's a mix of originals and covers to a passive pool or pub crowd or whether it's a show like the Soda Bar, Jesse never gives less than a full performance. My throat hurts just thinking about what he's doing to his when he hits certain notes. So after three hours at the pool, Jesse's voice was worked, but he kept it together for their 35 minute set at Soda Bar. Matt, the bassist for the band, couldn't make it, so it was really cool seeing Jesse play acoustic with Brandon on electric guitar and James with just a floor tom, a cajon, and some tambourines. They played a song I've heard them do a couple times but I still don't know the title (video here) and another new one, "Meteorite Shower" that I love for a million reasons including the fact that Jesse incorporated his dog's name into the song. ("we can say the same thing five million different ways/but Rosco T. he don't know what it means anyway...") 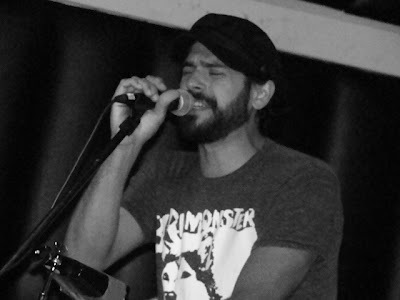 Following up was Skyline Union. The band was made up of familiar faces but I didn't know any of them personally. Turns out the singer, Frank, was the lead for Campaign For Quiet (or so I was told). His voice was amazing and sounds like he can do well with any genre or style of music. It kinda reminded me of Kevin from Better Than Ezra in certain ways. I couldn't really classify their music...it's rock with a bit of a throwback to classic rock (and an obscure Stones cover to prove it), but with the keyboard front and center, there's definitely a unique quality to what they're doing. I also have to say that I had fun talking to Frank after their set because he has this amazing positive energy and radiated enthusiasm. You would've thought that he was seeing his all time favorite bands as he supported JL&tDN and The Horde and the Harem. I know it's so hipster cool to hate life and be indifferent to everything, but someone like Frank defies that and it was very refreshing. 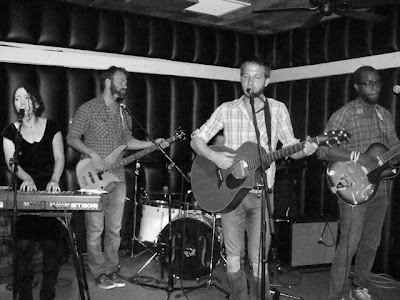 Finally The Horde and the Harem took the stage. They're from Seattle and didn't seem to mind that the crowd was mostly made up of the other bands and family. They were happy to be there, they seemed to like Soda Bar, and during their set, they mentioned returning in March 2012. I loved them. I loved the multi-part harmonies, I loved when they switched up instruments, and I loved when they switched up lead vocals. Their music certainly fits the caliber of indie rock coming out of the Pacific Northwest and I suspect the next time they come around they'll have a lot more local love.

Here are a few videos of The Horde and the Harem at Soda Bar:

Email ThisBlogThis!Share to TwitterShare to FacebookShare to Pinterest
Labels: jesse lamonaca and the dime novels, skyline union, Soda Bar, the horde and the harem

Thanks for the kind words. We always have a great time over at the soda bar and look forward to the next time! You can check out our schedule at skyline union's official website