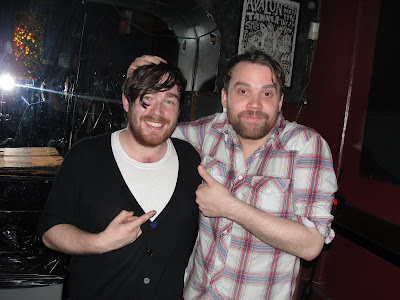 Next Tuesday, Frightened Rabbit return to San Diego. Sadly the days of the band playing the Casbah are probably over, but they're coming to town on the Death Cab For Cutie tour which rolls through RIMAC arena. While I'm still waiting to find out if UCSD is in the cards for me, I was happy to receive a facebook invite from my friend Matt over at the Hard Rock Hotel. Apparently Scott will be performing a solo acoustic set at 207 after their opening slot at RIMAC and the show is FREE and open to the public (21+). It says 10pm, but I'd exercise patience and say get there early and be prepared to wait. Below is a video of Scott performing one of my favorite Lemonheads songs, "Confetti", for the AV Club.

Scott was also part of this compilation for the Fruit Tree Foundation for 2010’s Scottish Mental Health Arts and Film Festival which also featured James Graham (Twilight Sad), Rod Jones (Idlewild), Jill O’Sullivan (Sparrow and the Workshop), Emma Pollock (The Delgados), Karine Polwart, Jenny Reeve, Alasdair Roberts and James Yorksto. This is one of my favorites from the compilation, with Scott Hutchison and James Graham.

You can also grab a free download of 'I Forgot The Fall' by Scott Hutchison & Rod Jones here. (right click, save as to download)
Posted by Rosemary Bystrak at Saturday, August 13, 2011