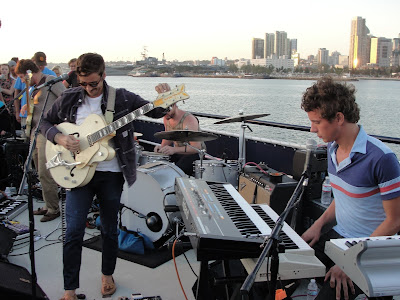 A few weeks ago, KPRI FM hosted another harbor cruise on the Inspiration Hornblower featuring Portugal. The Man. The band was on a promotional tour, playing for stations all over the place in anticipation of the release of their record, In The Mountain In The Cloud, which dropped on July 19. The boat was packed, and though I didn't have a seat saved up front like I have in the past, I decided to shoot most of it anyway...I missed a few songs because I had to swap batteries and the guys weren't much for in-between song banter, trying to knock out as many songs as they could on the 2 hour cruise, but I think you can get a good idea of the amazing set they performed.

Portugal.The Man has announced a full fall tour, including a San Diego date on September 30th at the House of Blues. Additionally, Alberta Cross will be the support band for the tour, and you can catch them starting tomorrow for a four-Wednesday residency at the Casbah. Alberta Cross has a new single called "Money For The Weekend" which doubles as your password to get into their Casbah show for only $5 (instead of $8). Just say "Money For The Weekend" to the doorguy and you'll get the discount.

Portugal. The Man - In The Mountain In The Cloud by ATL REC
Posted by Rosemary Bystrak at Tuesday, August 02, 2011