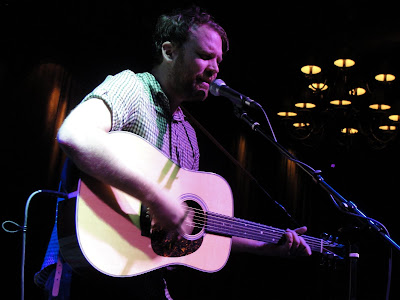 Last night I had the good fortune of going to the Death Cab For Cutie and Frightened Rabbit show at RIMAC Arena. I'll post some photos and talk about that later, but for now, since I stayed up to make sure these uploaded properly, here is most of the set that Scott Hutchison of Frightened Rabbit played at 207 at the Hard Rock Hotel after their RIMAC set. Since it started at 10, we actually left DCFC after about 7 songs, but I'd say it was worth it to see Scott back in an intimate setting. He was funny and charming as always, and Scott, if you're reading this, that thing with the Casbah? We can make that happen. You name the dates. Also, while you have a day off in San Diego, why don't you shoot me a tweet @sddialedin. I make a great tour guide. Seriously.

The playlist is in order of the set, and I actually titled everything for once. There are a couple oddball parts where I was being handed beer or trying to change batteries and memory cards between songs, but for the most part these look pretty alright. Mad props to my friend Matt for making this show happen.